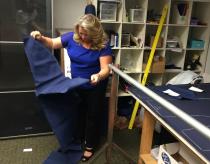 (Photo by Casey Kuhn - KJZZ)
Hildeez business partner Cherie Fox works with a pattern for the medical garment she manufactures. 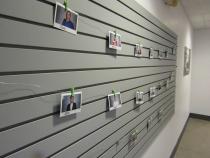 (Photo by Casey Kuhn - KJZZ)
Polaroids of tenants at the TechCelerator that Neal thought would allow people to get to know each other.

Walking into a recently renovated startup incubator in Surprise, the first thing you notice is a huge blue telephone box, which fans of a popular British sci-fi television show would recognize.

“We know our audience," said Jeanine Jerkovic, Surprise's economic development director. "I’m a comic-con attendee, so we thought that would be a great target audience. A lot of people are inspired by science fiction, so certainly 'Doctor Who' inspired this.”

The fixture disguises a bulky wheelchair lift and is just one decor choice hoping to appeal to a younger crowd.

The incubator, called AZ TechCelerator, offers cheap office space for emerging businesses in the city. AZ TechCelerator manager Julie Neal added other features to spruce up the space from its former interior design of musty carpet and wood paneling. There’s a recliner in the break room, string lights in the co-working space and instant camera pictures of tenants hung up in the entryway.

Jerkovic said the West Valley has an image problem when it comes to business, something the incubators are trying to change.

The city-owned startup hub is becoming a more common sight in West Valley cities, and you won’t find the millennial entrepreneur stereotyped in Silicon Valley or universities.

"They probably have an idea that pertains to their community and their family," Jerkovic said. "Probably inspired by different things than your average entrepreneur or your average typical technology–focused location."

“I swear that I think we were related in a past life, because we have so many similarities," said Cherie Fox, a business partner at Hildeez. "We're not only business partners, we're best friends."

Fox demonstrates how she sews the hem of altered scrubs in Hildeez’s manufacturing office. Her friend and CEO of Hildeez, Kimberly Cox, went to her neighbor, Fox, to help sew some scrubs that would make it easy for doctors to access her mother’s leg after surgery.  Now, they’re working to expand the business and sell the garments commercially.

"I made my mom a pair of pants. She went to the hospital and it was just the easy access because she has rheumatoid arthritis. I cut up a pair of my scrubs and added Velcro," Cox said about the beginning of her business.

If she hadn’t gone to her neighbor who knew how to sew, Cox may never have gotten the business off the ground. She credited the TechCelerator in Surprise for introducing the business to another entrepreneurial company in Peoria focusing on medical technology called BioInspire.

"It’s very, very hard for an entrepreneur company that doesn’t have ties to a college or any medical research type of connections,” Cox said about getting her business started.

The camaraderie with Hildeez and the city’s resources is indicative of the attitude commonly shared in the West Valley startup scene.

Jerkovic said by nurturing local companies, the West Valley has a chance to make an impact in the growing startup scene in Arizona.

"There’s not an entrenched culture where if you haven’t worked for LinkedIn or Google or another Mountain View company that you’re not going to make it," Jerkovic said. "There’s this feeling like anyone can make it."

Surprise has had approximately 30 different companies come through the space since its inception, one of which was sold to Google. Goodyear reported that at least 700 people have taken advantage of their startup resources, like mentoring and workshops, in the past two years. BioInspire in Peoria, where Hildeez is located, has provided services to 13 companies since 2012.

These are all signs that the image of the West Valley business scene may be changing.