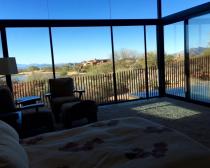 (Photo by Christina Estes - KJZZ)
The view from a master bedroom in Scottsdale's Desert Mountain community. 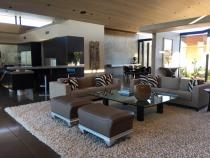 (Photo by Christina Estes - KJZZ)
The living and dining rooms at a home in Scottsdale's Desert Mountain community.

Anne Morrissey and her partners with Berkshire Hathaway Home Services have been showing a variety potential buyers around Desert Mountain, an 8,000-acre community in north Scottsdale.

While their backgrounds vary, Morrrissey said most seem interested in high-end contemporaries, which she describes as having unique architecture, open spaces and a lot of glass to show off gorgeous views. And, all are drawn to the lifestyle offered in the luxury community.

"We have six Jack Nicklaus signature golf courses, hiking and biking trails, a spa and fitness center and restaurants," she said. "You can be busy 24/7 should you choose."

Sitting in house priced at approximately $4 million, Morrissey said current interest seems to be among the low and high-end homes.

The season will slow down as temperatures heat up, but Morrissey said the monsoon season is never dry.

“People do come out in the summer to look for homes because they think they’re going to get a better deal because it’s summer," she said.

But, she said that doesn’t happen. Instead, they show off the infinity pools.