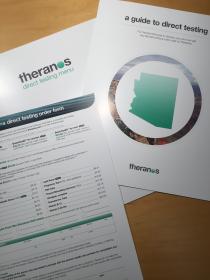 Walgreens' decision to stop using the Theranos lab in Newark, California, came after a letter from the Centers for Medicare and Medicaid Services warned about deficiencies at the lab.

There have been no warnings about the Theranos lab used in Scottsdale and, in a statement, Walgreens said that tests collected at 40 Arizona stores must be sent only to the Scottsdale lab or an accredited third-party lab.

Walgreens has ordered Theranos to immediately stop sending lab tests to the California location. The retailer also said it is suspending Theranos lab services at its store in Palo Alto, California.

In a statement posted on its website, Theranos said the federal findings do not reflect the current state of the California lab and a full plan of correction will be submitted within days.

Last year, Arizona Governor Doug Ducey signed a bill that allows consumers to get blood tests without a doctor’s order. Theranos is partnering with Walgreens to provide a variety of tests that people pay for out of pocket. According to the company’s website, tests range from $2 to more than $100.