Pickleball Bounces Around Arizona, Country Thanks To Snowbirds 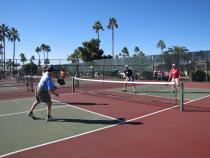 A sport called pickleball is on the upswing in Arizona and across the U.S., and it’s definitely a hit at Venture Out RV Resort in Mesa.

Ralph Zagrzebski is president of the resort’s pickleball club, and said they’re 500 members strong. Because this is an adult community, all those members are 55 or older. That’s the key demographic for the fast-growing sport. Zagrzebski said that’s because pickleball takes the rules of tennis, and puts them in a smaller court with smaller paddles and a slower ball.

“You don’t have as much running in this game,” Zagrzebski said. “A lot of the game is placement, so knowing where the ball’s going to be, you can be there a little bit quicker.”

“You can get beat by some 80-year-old women, and it’s quite humbling!” said Lorreen Ilot, a player who sat on the sidelines of a game Monday, a sparkly gold visor shading her eyes from the sun.

For Ilot and the other players, Arizona is a second home. In summers past when they returned north, pickleball came with them. Zagrzebski said when he started pickleball in Wausau, Wisconsin, seven years ago, he couldn’t find another place that had it in the state. Now there are more than 90 places to play in Wisconsin.

“So it’s grown that fast back there, too,” he said.

Other players also have stories of taking the sport back home. The man who brought it to Venture Out years ago is a snowbird himself from Washington, where the sport was invented. His name is Ewald Kunstle, and he’s still playing here today.

“Every year somebody goes back to their home state, and somebody starts pickleball someplace else. And that’s how I think pickleball really got going in this country,” Kunstle said.

According to the USA Pickleball Association, there are now almost 4,000 places to play the sport in the U.S., about a 300 percent increase from the numbers they listed five years ago, and that’s just places registered with their website. Arizona, which is headquarters of the association, has 162 registered places.

A lot of those places are private, though. You need to be a resident or member to access them. But public courts are popping up. Last month, the City of Scottsdale opened its first public courts in Cholla Park. Now some Arizona players have their eyes set on bringing pickleball even further - overseas. Whether it takes hold in other countries is up to the residents there.

The ball is in their court.