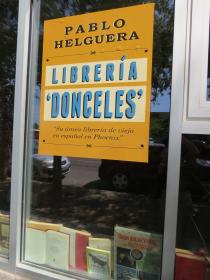 There’s an art exhibit in downtown Phoenix that many wander into wondering, where’s the art?

“So when you come in you know, the first thing that hits you is you can smell the books," Morales said.

The second thing you notice is the sheer number of books. Over 12,000 used books and all of them in Spanish, making this the only Spanish-language bookstore in Phoenix. Morales said the focus is on Spanish authors, not just translations of English-language books. And yes, just like in a real bookstore you can pick up the books and flip through them.

You can browse the sections or you can take a quick quiz and have the exhibit manager find your perfect match. I was curious about this. I filled one out and handed it to Morales.

“So we’re about to look for my adventure novel," I said.

“There’s some more Agatha Christie up here," I noted.

Christie and King. Not exactly Spanish authors, but Morales explains horror is one of the sections where it was harder to find Spanish authors. But then he hands me “my” book.

“Leyendas Mexicanas," he said, flipping through the pages.

The book is like a Spanish Brother’s Grimm but with traditional Mexican legends.

The conversation Morales and I have about the book is the point of the exhibit. Morales engages guests in conversation on topics ranging from immigration to ethnic studies, and the artist hopes to educate the community about Latino culture and to question why more Spanish-language books are not readily available in Phoenix.

So where did Helguera get all these books? On the inside cover of Leyendas Mexicanas is a name.

The donor of the book. She lives in Mexico City, where Helguera is from. All the books are donated. And in exchange for a book, guests make a donation of their own that goes to the Phoenix Public Library Literacy Program.

Librería Donceles is open for browsing Wednesday through Saturday until late June.