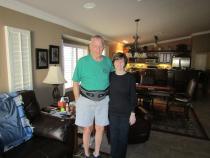 (Photo by Casey Kuhn - KJZZ)
Dian and Marvin Loyd, both from California, live in an active adult community in Buckeye. 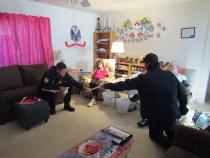 (Photo by Casey Kuhn - KJZZ)
Hess and Helms speak with the Rodgers, a couple living in Buckeye. Both have been to Banner Estrella Medical Center for various health issues.

It’s the last hours of Buckeye Fire Captain McKenzie Hess’s 48-hour shift and he, along with paramedic Jim Helms, are spending the time making house calls around town.

Their first stop is Betty and Lue Rodgers’ house, a couple who are both in their 70s. Betty has a pacemaker, and complains about nausea. Helms puts monitors on Betty’s arms and legs, and a sheet prints out heart monitor data.

“Looks like you’re ticking along pretty good now," Helms said, looking at the paper. "Look at you go!”

The paramedics move on to Lue, checking his vitals. They talk to the two not just about their health but about the weather, Lue’s new truck and the salt Betty needs for salami she makes for the firemen.

The house visit is part of a pilot paramedicine program Buckeye introduced as a way to lower hospital re-admissions.

Helm and Hess’s job is to go to patients who have been to Banner Health Estrella Medical Center and help them with things like making sure they’re taking prescribed medication correctly, a big reason patients return to hospitals.

Some research shows around 20 percent of cases never even fill prescribed medication.

Buckeye Fire Department teamed up with its medical director Dr. Todd Clever to develop the program.

"Community paramedicine is a new thing," Clever said. "It’s only been in the last couple of years that people have developed these programs. So nobody really knows exactly how to do it yet, so we’re kind of making it up as we go along."

How Much Can Community Paramedicine Help Reduce Readmission Rates?

It seems to be working. Out of 131 paramedicine patients, only four were readmitted within 30 days. That's a 3 percent readmission rate.

Buckeye is extending the program for another six months, and is looking for ways to keep it around permanently.

"Hospitals are penalized by the national government if they readmit too many patients, so the goal is to reduce that percentage," Clever said.

Hospitals can be fined up to 3 percent of Medicare funding if a patient is readmitted within 30 days.

The program is more than a money saver

While the program is working to save money for Banner Estrella, the patients seem to get more out of the visits than just a quick check-up.

"After the first time [they came] I thought 'oh they don’t need to come back,'" Marvin Loyd, 72-year-old Buckeye resident, said. "Then by the time it was time, she did call again, I did have a bad couple days and talking to someone who’s seen it, done it, been around it, it’s different."

Loyd is the third and last stop on the paramedics' list for the day. He had a spine fusion surgery a few months ago and is going through physical therapy. It has been tough for Loyd, who was active before the surgery, playing golf multiple times a week and working out for two hours every morning. Recovering from surgery has left him restless and trapped in his own thoughts.

For Loyd, the home visits help him mentally as much as physically. His wife Dian thinks so too.

“He’s always got a lift after the guys have been here and has a little more positive outlook,” she said. "Yesterday was a bad day, he was feeling kind of blues-y I think."

Paramedic Helms gives Loyd words of encouragement at his visit. Helms said while he hasn’t been doing this kind of work long, he thinks the program does more than just keep people out of hospitals.

“I take as much from it as much as the patients do," Helms said. "I learn a little bit of something that I didn’t know before and I think ultimately it’ll make me a better paramedic.”

For now, the program is still in pilot-mode, but Clever said the goal is to expand it out and continue to bridge the gap between hospital and patient.

EDITOR’S NOTE: This article has been modified to reflect updated numbers of paramedicine patients readmitted to hospitals.