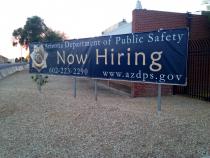 Riis Valcho - KJZZ
A banner recruits for the Department of Public Safety.

The hiring of police officers in the Valley and around the state slowed during the Great Recession. Now some agencies are looking to hire officers again. The recent recruitments may not be enough.

A large banner in front of the Arizona Department of Public Safety headquarters in Phoenix reads “Now Hiring.” The department needs 187 new officers to fill holes left from extreme budget cuts during the recent recession.

Law enforcement agencies around Arizona are beginning to hire again, including a handful of cities in the Valley. Cities such as Mesa, Glendale and Surprise. Missing from that list is Phoenix.

The Phoenix Police Department hasn’t had a graduating class of new cops in six years, choosing rather to move reserve officers to the streets and take lateral hires.

Phoenix Police spokesman Sgt. Trent Crump said they too are mindful how years of not hiring new officers affects workload.

“We’re getting to a staffing level that is concerning that we’re going to be able to maintain a level of service that we want to provide to the residents," said Crump."But those are the types of things, it doesn’t have to be the first responder that goes, but it maybe detectives that are following up on your burglary case or your assault case that are getting thinned out, and those are now taking much longer or were having less success."

Until the city can resolve its budget shortfalls, there are no plans to hire more officers anytime soon.