Experts Weigh In On Drone Industry During Chandler Conference 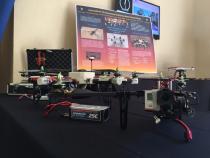 (Photo by Christina Estes - KJZZ)
The drone industry was discussed at a conference in Chandler presented by Embry-Riddle Aeronautical University.

According to UAV Global, there are nearly 440 companies that make unmanned aerial vehicle systems, more commonly known as drones.

"They're all bidding for a part of the market," said David Thirtyacre, chair of the Unmanned Flight Operations Department for Embry-Riddle Worldwide. "The prices are dropping down; the technology's going through the roof on them."

Thirtyacre said it is important that the Federal Aviation Administration, which is responsible for regulating drone use, take its time to get the rules right.

"I find myself defending the FAA more than ever now, just because of the task they have," he said. "If you think about the aerospace system that we have, the national air space system, incorporating in literally a million new objects into that is not a small task. While they're moving a lot slower than people would like them to move, I think they have control over it and I think they're doing some good work to get to the end game on it."

Thirtyacre said many people who have knowledge of aviation safety are buying drones, and that is creating challenges.

"Lots of times I hear people say, 'This thing only weighs half a pound. It's not going to hurt an airplane,'" he said. "Well, they don't consider the airplane's going 300 knots in the other direction, and that impact's the same as if the drone was going 300 and the plane's still."