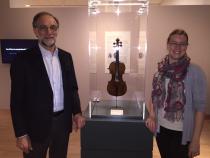 (Photo by Phil Latzman - KJZZ)
Paolo Bodini (left), president of Friends of Stradivari , poses with MIM's Europe curator Kathleen Wiens (right) and the exhibit's prized possession, a 1728 Stradivarius made by the master himself, Antonio Stradivari.

(Photo courtesy Musical Instrument Museum)
​Workers at MIM prepare the rare violins for "Stradivarius: Origins and Legacy of the Greatest Violin Maker."
(Photo by Phil Latzman - KJZZ)
Paolo Bodini, President of Friends of Stradivari, poses with MIM's Europe curator Kathleen Wiens and the exhibit's prized possession, a 1728 stradivarius made by the master himself, Antonio Stradivari.

Northern Italy is coming to north Phoenix as a very special exhibit featuring some of the world’s most fabled musical instruments heads from the Val de Fiemme to the Valley of the Sun.

The Stradivarius is one of the rarest and most valuable musical instruments in the world. And soon 10 of them will be on display right here in the Valley in a new exhibit starting this weekend at the Musical Instrument Museum (MIM).

“We are extraordinarily fortunate to have this exhibition here. It certainly speaks to our mission,” said April Salomon, MIM’s executive director. who believes the Stradivarius exhibit marks an important milestone in the museum’s five-year existence.

“It is a little bit of a game changer, for sure. These are the kinds of things that you would normally expect to see at the Metropolitan,” Salomon said.

The one of a kind exhibition brings 10 of the timeless masterpieces — ranging from 500 years old to modern versions — together in one space and takes us all the way back to 16th century Italy to hear how the modest city of Cremona shaped musical history.

“You will be brought to the magical town of Cremona, and you’ll be walked through the life of a violin and the many hands it passes through, the hands of a master maker, the hands of a musician," said Wiens.

“Two years ago, I made my first visit to the Museo del Violino in Cremona. They look on musical instruments in a very similar way that we do,” Wiens said. “They’re interested in the life of these instruments and the people who made them, and the legacy that they’ve created.”

While in Italy, Wiens met with Paolo Bodoni. He’s the former mayor of Cremona and now president of Friends of Stradivari, an international organization whose mission is to bring together those who posses or use the rare violins believed to have been first made in his hometown.

“One of our purposes is also to promote violin making and make Cremona more known in the world. So, this we thought was a very good chance," said Bodoni.

So, the 10 violins, some as old as 500 years, were carefully packed and shipped to Phoenix.

The exhibit includes a 1728 model on display for the very first time in the U.S. It was made by the man considered the master of the violin and its namesake, Antonio Stradivari.

“He certainly was the best maker ever,” Bodini said. “He (Stradivari) had very particular way of choosing the type of wood, making the varnish and the sound is very special.”

That’s the because the wood used to make the stringed masterpiece comes from only one small part of the world: the forest in the Italian Alps that surrounds Bodini’s ancient city of Cremona.

“The Spruce Tree, which is the sound wood, the tone wood at the top of the violin, grows only in a couple of Valleys in the Alps, near the Dolomites, Val de Fiemme,” Bodini said of the raw materials used to make the stringed masterpieces.

He adds that only 10 percent of this wood is good enough to make the coveted violins.

That makes them the rarest of the rare, with some worth more than $1 million each.

Visitors to MIM will not only see and hear the Stradivaris version, but also those handcrafted by Andrea Amati, the 16th century maker considered the father of the violin, and the rogue genius of the strings, Guarneri del Gesu.

Special opening weekend activities at MIM include concerts featuring some of the world’s most talented violinists, including virtuosas Rachel Barton Pine and Regina Carter.

"Stradivarius: Origins and Legacy of the Greatest Violin Maker" will be on display at the museum until June 5.

EDITOR'S NOTE: The photo captions in this article have been modified to reflect the correct spelling of Stradivarius.