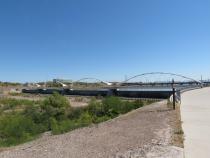 (Photo by Carrie Jung-KJZZ)
The current western dam and the site of the planned replacement. 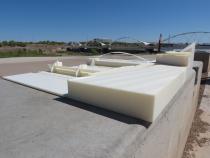 Officials with the city of Tempe are gearing up for a construction project at Tempe Town Lake. The new dam will cost the city about $40 million and is expected to last more than 50 years.

In just a few weeks, construction crews will begin work building a new hydraulically powered steel gate dam about 100 feet west of the current structure. The 950 foot dam is an upgrade from the inflatable rubber bladder dam that is currently regulating the waters of the Tempe Town Lake.

"What we’re going to build is a steel gate system with hydraulic piston operators that move up and down, so there are no large rubber bladders," said Frances Ackerman, a project manager with Gannett Fleming, the firm responsible for designing the project. "It will be much less subject to problems due to the extreme climatic conditions here in the valley."

She added that reliability was a huge factor in the planning process, as the city hopes to avoid another break in the system similar to the collapse in 2010. And while she said looks were not their number one concern for this project, it was a factor they considered every step of the way.

"It’s going to be a beautiful dam to watch." said Kris Baxter-Ging, a public information officer with the city of Tempe.

She said many of the resources used in construction will be sourced locally, adding that the environmental impact of the update should be minimal.

"The only thing that we have to do is take out some of the vegetationm, but all of that has grown since the last time we replaced the dam," Baxter-Ging said.

A public meeting is scheduled for April 23 to answer any questions residents may have about the dam project.