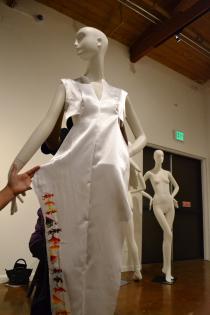 (Photo by Annika Cline - KJZZ)
A dress with a modern cut and traditional pattern on the trim will be one of the artworks.

Confluence is a coming together of people or things, and in the Heard Museum’s Lincoln Gallery, that definition has come to life with an upcoming exhibit called Confluence: Inter-generational Collaborations.

Seven teams of adult and teen artists from different Native tribes across the Southwest have brought their studios into the museum.

The teams are working on fashion design, film editing and metalsmithing, all while sandwiched between two huge murals being painted on the gallery walls.

Jaclyn Roessel, curator of the Confluence exhibit, said this diverse mix of tribes, art styles and ages is exactly what she had in mind. It’s reflective of the demographic shift happening in Indian Country right now; it’s getting younger. Percentages of people under 30 are at an all-time high, and Roessel said she’s concerned that young Natives are becoming disconnected from their tribal roots.

“It seems to me that there’s more of a need now for there to be tools to be able to cultivate leadership skills and dialogue between those generations,” Roessel said.

On one gallery wall, 17-year-old Ashlee Craig is painting a mural with her artist mentor, Dwayne Manuel. She’s adding brilliant red hues to a flower with a face on it.

“This flower basically just represents an individual finding clarity within itself,” Craig said.

Manuel stands on a ladder, sketching out red and blue lines that intersect one another and become purple.

“I use a lot of my peoples’ basket designs, and basketry is a cultural tradition,” Manuel said.

Manuel is from the Salt River community, where basket-weaving is a traditional art form.

“I started to incorporate the design with urban landscape,” he said.

“That’s where sometimes the public gets misconceptions, is not being able to place native people in a contemporary context as people that, you know, wear hats, wear tennis shoes, work in spray paint, work in glass, work in, you know, every medium available to them,” Roessel said.

So while Confluence is a mixture of many things, it’s all Native, a term that artist Darylene Rainy Martin said is being redefined.

“Nowadays, the younger generations are actually acknowledging who they are through fashion and art and music and all of that,” Martin said. “So I think with us artists, is we’re just encouraging that step forward.”

You can step into Confluence: Inter-generational Collaborations at the Heard Museum starting February 6.