Did You Know: Wind Cave At Pass Mountain Is Not A Cave 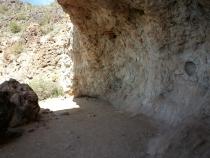 (Photo by Nadine Arroyo Rodriguez-KJZZ)
The Wind Cave is not really a cave.

It’s a popular hiking location in the East Valley. One reason-- it's mountain-top scenic attraction. I took a stroll to a Valley cave.

The hiking trails on Pass Mountain near Mesa are flush with scenic views and treasure troves of plants and animals. Did You Know at the end of one trail there’s a popular spot called the Wind Cave?

“It’s kind of like a cave but not quite. It’s more accurately called an alcove," said Ranger Brennan Basler.He took me on a mile and a half trek up to the Wind Cave.

“So, there’s the cave. You can see the shadowy cliffs with the alcove up there," Basler said.

"It looks so tiny from down here," I remarked.

"It does, it does. It’s much bigger once we get up there," said Basler.

With each step higher you can see more and more of the East Valley. Occasionally small critters will pop up to welcome you.

“Would you like to see a rattle snake?" Basler asked.

"If it’s from a distance I’d be happy to see a rattle snake," I said.

"Oh, there’s a little Harris’s antelope squirrel on the rock there about 20 feet," Basler said.

After an hour of climbing a series of switchbacks, we arrived at the cave. From up close it looks more like a baseball dugout. Basler explains this is thousands of years old.

“What you get here is a lot of wind rushing along the cliff here coming down from the north, and it hits this angle in the rocks. So, what that wind does, is it picks up all of this grit, this sand particles, and it hits this elbow in the rock and just scours it out over time," Basler said.

The Wind Cave sits 2,800-feet above sea level. Basler said the hardened layer of volcanic ash that is around it is about 14 to 15 million years old.

“By far the majority of the hikers that come to Usery Mountain Regional (Park) come to the hike up to the Wind Cave, because of the challenge, the view, the beauty of the plants and animals here along the trail," said Basler.

Here’s another fact about the Wind Cave. It’s home to 40 year-old bee hives and a colony of cliff chipmunks. They might come out looking for food.

But Basler said don’t let their chirping fool you into feeding them.