Dennis Lambert Reflects On 20 Years On Air At KJZZ 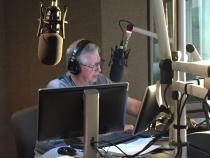 (Photo by Katherine Fritcke - KJZZ)
Dennis Lambert in the studio.

Dennis Lambert is retiring in January after almost 20 years on the air in Phoenix. His last day in the office was Dec. 30, 2015.

Lambert has been a prolific news voice in Arizona. He and his news team won a Peabody award for coverage of the impeachment of former Arizona Governor Evan Mecham. He also won national Murrow and Scripps Howard awards for that news event.  Dennis received the Order of the Silver Key from the Phoenix Chapter of the Society of Professional Journalists for 25 years of broadcast excellence.

As a KJZZ reporter, Lambert won a regional Edward R. Murrow Award and several Associated Press awards. Lambert has also been recognized time and again by both the Associated Press and the Phoenix Press Club for his outstanding work.

KJZZ will host a retirement celebration for Lambert on Feb. 2, 2016, for KJZZ supporters in the community.

Phil Latzman, who took over as Morning Edition host, talked to Lambert about his tenure.