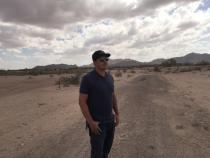 The drought in the West has revived questions about who wins and loses when there's not enough water. But for Native American tribes, this is nothing new. Many spent years in court fighting for their water and only in recent years have some started seeing the benefits. For one tribal community in central Arizona, that’s a valuable economic opportunity

When a stretch of the Gila River began to recede in the late 1800s, so too did the way of life for a civilization more than 1,000 years old.

“In their own language, these are the Akimel O'odham. These are the 'river people,' literal translation," said David DeJong, while standing next to an irrigation canal that directs water into an offshoot of the river.

"These are a people, who so identified with the river, that became the very essence of who they were,” he added.

DeJong has written about the Gila River Indian Community’s history and runs the Pima-Maricopa Irrigation Project, which will eventually carry water to growers across the reservation. This undertaking is the result of years of negotiations to reclaim what the tribes lost when settlers first began diverting water upstream.

“It literally took the entire flow of the river. In fact, there are recorded documents that indicate some of the off-reservation farmers intentionally wasted the water, rather than letting it go back in the river, so that there would be no water down here on the reservation and that would force tribal members to go upstream and work for non-tribal farmers," said DeJong.

To this day, miles of ancient irrigation canals throughout central Arizona speak to the tribal legacy as one of the most advanced agricultural societies in North America, said DeJong, all of which essentially came to a standstill when the river dried up and famine ensued for many on the reservation.

In 2004, the community finalized its massive water settlement with the federal government and now hopes to reawaken those agrarian traditions and the river that sustained them. A key part of that plan will take shape along the Gila River itself at "manageed aquifer recharge" sites, designed to allow water to percolate into the aquifer below.

“Not only is it going to restore the riparian canopy that once lived along the river, as importantly the community is recharging water for future use,” said DeJong.

DeJong called this water — piped from the Colorado River hundreds of miles away — “money in the bank."

"The community could, if it chose to, sell these credits to a city in the metropolitan area of Phoenix, or leave it in the ground and pull it out at a future date," he said.

“We’re really at a crossroads with our water settlement," said Stephen Roe Lewis, governor of the Gila River Indian Community.

Lewis said purchasing the water and building the infrastructure is expensive. To help pay for that, the community has banded with the Salt River Project, a local utility, to put some of this banked water on the market.

“Marketing of our water credits and leasing, that is going to be critical to the ongoing supply in the future. That is really going to be a driving economic force in this region," said Lewis.

Indeed, the community is entitled to more water from the Central Arizona Project (CAP), which delivers Colorado River water, than anyone else and will be a major player in the water market in coming years. Still, like everyone else, they have to work within the realities of a water-stretched West.

“The tribes negotiated their settlement in the context of a western water policy that’s really coming to an end,” said Daniel McCool, a professor at the University of Utah and author of several books on this subject.

Some tribes in the west have access to large water supplies. With vital sources like the Colorado River over-allocated, McCool said all players may be forced to renegotiate, not to mention pay more for water.

Already, the Gila River Indian Community's settlement placed certain restrictions on where they could sell water.

“[During the settlement negotiations], a lot of people just hated the idea that a tribe might get a quantified amount of water and then open that up to the highest bidder because it would be western cities that would be bidding for the water,” said McCool.

As a result, the community can only market water to cities locally and not, for example, to Las Vegas or Los Angeles. Nonetheless, McCool believes their settlement was overall favorable and has positioned them well.

Ultimately, this marketing plan is in the service of a greater cause: reviving the economic and cultural life on the reservation for young farmers like Cimarron Cabello, whose wife inherited a 20-acre plot on the reservation.

In a year, they plan to have it in full production with more land on the way.

“We’re just trying to bring it back," said Cabello, "like the water is coming back for the Gila River, we've got to bring the farms back.”

A major priority for Lewis' administration is to encourage young entrepreneurs and farmers like Cabello.

“When you can actually smell and taste the water firsthand, that shows that our sacred water is back and that we have a bright future ahead of us," Governor Lewis said.