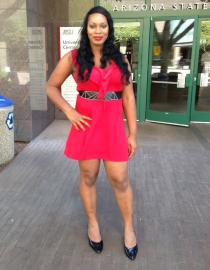 (Photo by Nick Blumberg-KJZZ)
Monica Jones at the Downtown Campus of ASU. 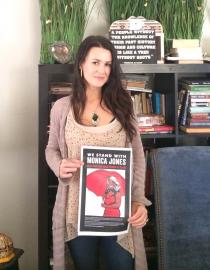 A transgender woman who advocates for the decriminalization of prostitution thinks that her activism, as well as who she is, have made her a target for police.

(Please note that some of the language in this story is explicit.)

Monica Jones is tall. She is 6-foot-2 and even taller in heels.

"I stand out in a crowd," Jones said.

It's precisely because she stands out that makes Jones think she has been profiled.

One night in May of 2013, Jones was walking down Thomas Road, as she often does.

She is a regular there most Friday and Saturday nights.

A car pulled up and offered her a ride. She accepted. The driver turned out to be an undercover Phoenix police officer. He asked Jones how much it would cost for oral sex.

Jones is a former sex worker and now a sex worker rights advocate. She said she was not interested in doing what the officer asked for. The cop who picked up Jones said she exposed her breasts before getting in his car. She denies that.

Jones was arrested and taken to a program called Project ROSE. It's a partnership between several community agencies, Phoenix police, and the ASU School of Social Work, where, coincidentally, Jones is a student.

The program helps certain people arrested for prostitution get social services like rehab or safe housing, and they get the option of going through a diversion program to avoid charges. Jones said when she was at Project ROSE, she was pressured to sign an agreement to enter diversion.

"The cops came and said, well, if you don't want to sign it, we can take you down to 4th Avenue Jail," Jones said.

Jones knew she was ineligible, because she went through a diversion program years ago. Eventually, she was let go. Then, nearly four months later, she got a summons in the mail.

Jones thinks she was charged because she had protested against Project ROSE and had posted online warning sex workers about it.

"You shouldn't be out there arresting girls, or anyone, for sex work," she said.

Jones is involved with the local chapter of SWOP, the Sex Worker Outreach Project. So too is her friend Jaclyn Moskal-Dairman, who thinks consensual sex work should be legal and said Project ROSE mainly targets women in poverty.

"Criminalization for people in poverty is disastrous," Moskal-Dairman said. "And to be told to quit your job, and to go into a program (where) you're provided services that you may or may not need, it lacks a nuanced analysis of these women's lives."

Moskal-Dairman said instead, reach out to sex workers online, or hit the streets, "Handing out condoms. If you're a drug user, handing out clean injection kits. If you need safe housing, detox ... "

But she thinks you should not help people get those services by arresting them. On the four days a year when Project ROSE is held, police step up enforcement of prostitution. A spokesman would not give me an exact number, but various reports say between 100 and 125 officers patrol the streets making arrests.

"If at some point they deem that prostitution is no longer illegal, then we would stop enforcing that law, but we have an obligation to enforce that law," said Sgt. Steve Martos of the Phoenix Police Department, which is one of the main organizers of Project ROSE.

Martos said the project is a way to drive down high recidivism rates for prostitution.

"The hope is, by providing resources to individuals who are stopped for this type of criminal activity, that they might actually be able to get out of this life of crime, if you will," Martos said.

And as to whether Jones was profiled for being black or trans or an activist, "She was taken in just like anybody else," Martos said.

But Jones doesn't think police treat her just like anybody else. Jones took a video on her phone when she and a friend were stopped. The officer said Jones and her friend matched the descriptions of people reportedly arguing on the street.

"I need to do my due diligence, and if you allow me to do my job, just like you want to do your job, then I will be glad to," the officer said in the video.

"I have no idea," the officer said.

Jones told the officer she is a student at ASU.

"That's wonderful, but I'm also letting you know that you're in an area known for prostitution," the officer said.

"So that makes me a prostitute automatically?" Jones asked.

"Did I say that?" the officer replied.

"No, but that's what you're -- " Jones started to say when the officer cut her off.

"You know what, Monica, I'll be glad to document this. I know you're familiar with manifestation, I'm going to go ahead and document that in the report," the officer said, getting back into her squad car.

Phoenix Police said they do not profile anyone, for any reason -- they target crimes.

And the crime Jones is charged with isn't actually prostitution. The officer who stopped Jones mentioned it: manifestation of an intent to commit prostitution.

Phoenix's Municipal Code describes manifestation as behavior like stopping passers-by, flagging down cars, asking people if they're a cop.

In a brief written with an assist from the local American Civil Liberties Union, her lawyer argues that statute violates the First Amendment right to free expression, and the due process clause of the Fourteenth Amendment. He said the broad description of behaviors makes it hard to know how to avoid getting charged, like Jones was.

"(It's) just a lot of stress on me, going to school and doing my schoolwork, but also going to court and the possibility of me being found guilty," Jones said.

If that happens, Jones worries she will not be able to finish her degree. She also worries about going to jail with men. According to the National Transgender Discrimination Survey, nearly a third of black transgender people who had been in jail or prison said they were physically or sexually assaulted while in custody.

Jones's trial is set for April 11.