Karsh's Bakery Closes After Over 40 Years 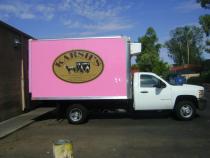 A landmark central-Phoenix kosher bakery is closing after more than 40 years in business. Karsh’s opened in Phoenix in the 1960s on Central Avenue and moved to its 7th Street location in 1985. On Wednesday, it will open its doors for the last time.

Ken McKinney has worked at Karsh’s 19 years. He said the closure is partly due to the economic downturn but also a downturn in demand for kosher goods.

It’s just changes through generations. You know, some of them aren’t as strict as they were growing up," said McKinney. "People that grew up here come in, but it’s just, it’s just not enough."

McKinney said cheaper cakes and bread in grocery store bakeries have cut into business. Karsh’s has made cakes for all occasions and traditional Jewish baked goods like challah bread.

McKinney is expecting a lot of people Wednesday as customers rush to get orders filled before the doors close at 6 p.m.