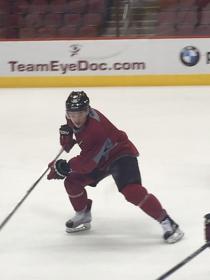 Max Domi streaks around the ice at during practice at Gila River Arena in Glendale.

The rookie left wing is only 20 years old. But he’s grown up quickly — both as a hockey player and a person.

“It’s not easy to be a professional athlete, period. So I’ve learned a lot about myself and the person I can be just from learning from the disease," said Domi.

That disease is Type 1 diabetes, an autoimmune condition that shuts off the body’s production of insulin, rendering the pancreas useless.

Instead, Domi must do the organ’s job himself, by taking insulin shots and constantly checking his blood sugar, something he does up to 30 times a day.

An underdose of insulin could make him ill. An overdose could cause him to pass out while playing and severe low blood sugar could be potentially fatal.

So, does he ever worry when he’s out on a shift and feels shaky and light-headed?

“Yeah, I mean obviously, sometimes that happens. But, you try and learn as much as you can and the training staff is great so they make sure that doesn’t really happen," Domi said.

Domi was diagnosed with juvenile diabetes when he was just 12. It didn’t stop him from rising in the ranks of Canadian Junior hockey in his native Ontario.

One of his juniors teammates is now his Coyotes teammate, fellow winger Anthony DuClair.

“He’s gotta check himself pretty often, and make sure he’s eating right. His diet really has to be on point," DuClair said. "It’s really incredible how many things he has to do during the day. Us professional players know we have to take care of our bodies, but he’s just on a different level."

“As a person and a player he’s learned how to deal with it. Now, it’s just become second nature. He gets checked on the bench during the game, gets poked in the finger and everybody just looks at it as normal now," said  Tippet.

And it hasn’t affected his play. Domi is one of the team’s leading scorers and one of the leading candidates for NHL rookie of the year award.

It also helps that Max also grew up on the hockey rink. He’s the son of longtime NHL enforcer Tie Domi. Tippett was involved in a few scrapes with his dad and said the younger Domi is more speed and finesse than his old man.

“I played against his dad for a long time, so they play a different style, that’s for sure," he said.

But Tippett said there are some similarities.

“If you look at Max’s tenacity on pucks and getting involved in the game, they do it a different way. But both have an effect on the game," said Tippet.

Off the ice, Domi has a best friend named Orion, a yellow Labrador retriever that serves as a constant companion helping this Coyote control his diabetes.

“So, he’s a service dog, and he actually alerts me when my blood sugar gets too low. And he’s right 99.9 percent of the time," said Domi.

How does he know for sure?

“You give off a scent in your saliva that he’s been trained to pick up. It’s amazing how smart he is,” Domi said. “It’s amazing the connection you have with your dog.”

As for the connection fans in Arizona have with their hockey team?

“It’s a little different for sure. I mean, hockey is pretty much everything back in Toronto. The Maple Leafs are huge," said Domi.

But despite the fact that no one would mistake Phoenix for Toronto, he defends Coyotes fans whom he feels get a bad rap.

“There’s all this huss and fuss about how they don’t get enough fans or whatever in Phoenix. This is a great hockey market and even better place to live," he said.