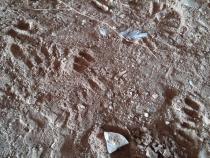 (Photo by Andrew Bernier - KJZZ)
Fresh animal tracks are present, a telling sign the underpass is already getting use before being completed. 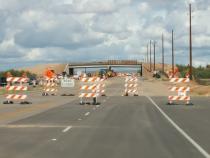 (Photo by Andrew Bernier - KJZZ)
Jeff Gagnon with Arizona Game and Fish said this is the first overpass in the Sonoran Desert.

Highways in Arizona traverse open and urban areas, connecting people across the state. But roadways often create dangerous habitat divides for wildlife. Now, unlikely partners are developing what they hope will become a model for safe wildlife travel, even amid a development boom.

Along a widening project on state Route 77 north of Tucson, representatives from different groups hold a weekly meeting near the base of an almost finished bridge. Jim DeGrood with Pima Association of Governments said these officials came together for the bridge not to connect the growing communities along the highway, but to join together the open land around them.

“What we’re looking at right now is a project by the Arizona Department of Transportation," said DeGrood. "But to make this work, we have to have the county and the town and the state land department working together to make sure that we're preserving this corridor between the two mountain ranges.”

Those two ranges, the Santa Catalina and the Tortolita Mountains, are critical habitats many Sonoran wildlife species migrate between. The highway bisects that migration, leading to dangerous interactions between vehicles and animals.

When ADOT announced the widening project, DeGrood said it wasn’t easy to make the wildlife crossing part of the plan.

“We had suffered through four failed transportation initiatives, we knew we needed to come together with all of the parties," said DeGrood. "That was the first time we ever really approached the wildlife community in trying to work collaboratively with them, and I think this is a fine example of how we can do it together and address mutual goals.”

Jeff Gagnon with Arizona Game and Fish said this also marks a first for the region.

“This is the first overpass in Sonoran Desert," said Gagnon. "We really don’t know what to expect.”

However, Gagnon is encouraged by the success of overpasses in other state ecosystems.

“Some of the other projects we’ve worked on have reduced collisions with big game by 85 percent to 100 percent, so they’ve been very successful in that regard so you would expect to see the same thing here with deer and some of the larger animals,” Gagnon said.

Some species, such as javelina, have already started using the overpass. Along with tracks in the soil, more official methods help record who uses the crossing.

That surveillance translates into data. Gagnon said the footage helps with PR to garner support for more bridges, but it’s data that helps convince another critical group.

“Engineers respond to data, they don’t respond to theory that well," said Gagnon. "So, when we can bring data to the table and go, ‘Hey, this works.’ Then they’ll move forward.”

The bridge spans six lanes of highway. Driving under it, you would probably think it was a normal bridge, and that’s what ADOT Engineer Jeremy Moore expected during construction.

”Basically the construction of this crossing is identical to a traffic bridge,” said Moore.

Except if you’re on top, where there’s a thick layer of soil for Sonoran vegetation.

“It’s got a dead load of four feet of fill on top of the bridge deck," Moore said. "And then towards the ends there's vegetation that gets planted on top of here, try and blend that in.”

“It is about recreating what’s in the area,” said Carolyn Campbell with the Coalition for Sonoran Desert Protection. She said amongst rapid development, placement options for the bridge were limited.

“Big roads are the biggest barriers and here we still have open space," said Campbell. "So we can design and hopefully acquire and set aside open space on both sides of it. But if we didn’t do this, it would all be developed.”

Campbell said acquiring land from the bridge to the mountains is one of the last hurdles for the project. She said the county has the money and intends to buy it, but there are no guarantees.

“All of the land that you saw on both sides of the bridge, all the way to the mountains, is state trust land," said Campbell. "Up for the, you know, highest bidder.”

Underneath the bridge, cars were driving at normal speed, echoing off the concrete walls. But if noise will be heard up top, will it keep animals away?

“At the end of the job, there’s going to be asphalt course put down that's got rubber in it so that’s going to reduce the noise greatly," said Moore. "And ultimately you are going to get some noise up top. But I think once you get the barrier wall poured up there and you get the fencing, it’s going to isolate that a little bit.”

A few miles south an underpass also serves as a safe wildlife crossing, though Gagnon said when given the choice, the overpass is preferred.

“There’s many wildlife species that won’t use an underpass," said Gagnon. "It’s like a cave, they won’t go in there. Whereas an overpass, we know almost all wildlife species will use an overpass. So this is an opportunity to do the best for the species in this area to get them from point A to point B.”

To be completed this spring and $45 million budgeted for more, overpasses and underpasses like these make it safe for all species — humans or otherwise — to get to where they’re going.