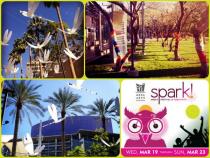 (Photo courtesy of @MesaArtsCenter)
It’s beginning to look a lot like spark!

What does this sound like to you? Well it’s not the soundtrack to a sci-fi film. What is happening here is actually the result of people interacting with a structure of metal bars crisscrossed to make a half-dome. If a hand touches one of the red or blue bars, it will make a certain sound. A bunch of hands can make this.

This sculpture can be found at spark!, Mesa’s Festival of Creativity at the Mesa Arts Center. There is also a garden made of recycled paper and plastic materials and a musical playground of tubes and drums that can be played by multiple people at once.

"Those are a couple of examples of things that people might otherwise not have seen and that might not have happened if those artists weren’t doing them for this event," said Cindy Ornstein, the executive director of the Mesa Arts Center.

She said spark! gives artists, performers and creators a place to try new ideas. For instance, the Wonderdome, an IMAX-style theatre with a screen and live actors.

It is actually the Wonderdome’s debut here at Spark! The highly technological 30-foot wide theatre was conceived by Daniel Fine, a student at Arizona State University. He and a partner created the theatre as their thesis project.

"What we’re looking to do is to create all kinds of different live performances inside an immersive dome where the sound system, the lighting system and the projection system are all responsive to both the performers and the audience," Fine said.

It is a new idea and a big undertaking. So of course Fine expected there might be technical difficulties at the festival.

"So we decided to make the dome itself a living character. So when things didn’t work it was sometimes because he was kind of a new dome who just got built and he doesn’t always work," said Fine.

“Well it’s still sort of in beta," said one of the actors.

But Ornstein said they do not mind if things aren’t perfect.

"They have a place to show new work, take those risks of things that might not work out. They may have to try a different thing or maybe parts of them don’t even end up working but that’s okay because we want to celebrate their efforts," said Ornstein.

The event is interactive, you know...here’s my art, now touch it. You can hear, touch, explore and watch it all through Sunday at the Mesa Arts Center.