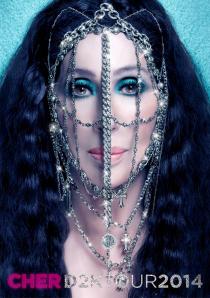 (Courtesy of @Cher on Twitter)
Cher kicks off her 2014 tour in Phoenix.

This is going to be a big weekend for music in the Valley.  And one performance holds a special place for commentator Robrt Pela.

Cher is coming to town. She’s kicking off her latest tour here in Phoenix on Saturday.

Friends assume that I am going to go to this Cher concert, because I own so many Cher albums. But the Cher I would like to see in concert doesn’t exist any more. I like the Cher who sang Bob Dylan songs on Hullabaloo in 1965. The one who scared uptight suburban parents because she wore bell-bottoms and seven pounds of eyeliner and was married to a hippie who wrote songs for her about runaways and pregnant teens.

I am not interested in the ageless, timeless Cher who sings disco numbers in arenas. This is the Cher about to embark on a world tour.

Cher's people staged a promotional stunt where fans presumably got to pick which songs she would sing on her tour. I went to Cher’s website to check out this obvious scam and was startled to find listed among obvious Cher hit singles like “Half Breed” and “Turn Back Time” my favorite Cher tune, and perhaps my favorite song of all time: “Alfie,” the Burt Bacharach and Hal David number from the 1966 film of the same name.

But I’m not buying it. In concert, Cher doesn't sing second-tier hits from the 60s like “Alfie” (which peaked at #32). She sings “Believe” and unfortunately “Gypsies, Tramps and Thieves.” I saw this pick-the-hits bit for what it was: A promotional gimmick aimed at more gullible fans who might believe that if enough of them click on “A Cowboy’s Work is Never Done,” Cher will dust off this all-but-forgotten 1972 Sonny and Cher 45, and force her band to learn it.

Cher is not a marionette or a jukebox; she’s a performer with a new record to promote. Her set list, prepared and rehearsed months ago, will undoubtedly feature material from the new album - including the most annoying Cher single in decades, “Woman’s World” - as well as her most recognizable radio hits from the 70s and beyond.

It’s too bad. I kind of like the idea of fans picking Cher songs that she is then forced to travel the country performing for months on end.

My Cher set list would include “She’s No Better Than Me,” about a girl whose teenaged beau has dumped her for a cuter chick. And, just for fun, “Ringo I Love You,” Cher’s first-ever single, a tribute to the Beatles drummer. And as an encore, instead of “Believe,” I’d make Cher sing Bob Dylan’s “Like a Rolling Stone,” as a reminder to everyone in the sold-out arena that once, a very long time ago, Cher was a thrillingly scary girl singer who really had something to say.