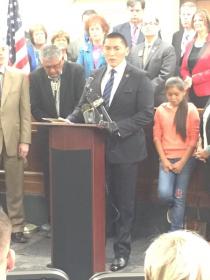 (Photo by Phil Latzman - KJZZ)
Arizona State Senator Carlyle Begay announces his intention to switch parties from Democrat to Republican at the State Capitol on Monday.

An Arizona legislator is switching parties.

State Sen. Carlyle Begay, who represents the Navajo town of Ganado, announced his decision to become a Republican at the State Capitol on Monday.

Flanked by state GOP leaders including U.S. Senators John McCain and Jeff Flake, the longtime Democrat said he believes his new party is more aligned with his beliefs as a Native American.

"With an open and heart I clearly see that the Republican Party is the party of progress, a party of hope, a party of opportunity and moving forward, my party."

Begay said he feels he can be a more effective legislator as a member of the majority.

“My hope is to follow the direction of my ancestors and embrace progress by helping the Republican Party as they build a bridge connecting those who need and want a chance, with those who can provide that chance.”

Begay was initially appointed to the State Senate in 2013 to fill a vacancy and was elected the following year.

In addition to control of the House, Republicans now have an 18-12 majority in the Senate.

In a statement, Arizona Senate Democratic Minority Leader Katie Hobbs said the decision to change his party affiliation "comes as no surprise."

There have been hints that he might change allegiances. Begay was the only Democrat to vote for the Republican budget during this year's session.