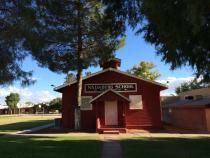 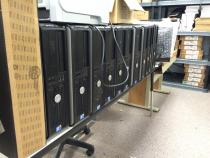 (Photo by Casey Kuhn - KJZZ)
These computers were donated from Toyota, which has a test center close to the district.

It’s the end of the school day at Nadaburg Elementary School and staff mingle while the children climb onto buses to go home.

Some of these buses are more than 10 years old, and Nadaburg Unified School District Superintendent Rick Stephen said this could become a problem down the road.

"This year we did cut back on a few of our routes that were on dirt roads that were very rough because that’s a lot of wear and tear to the axles," Stephen said. "We’re concerned about the safety of it."

To replace these buses, along with other repair costs, Nadaburg tried to pass a $525,000 override this year.

It failed for the fourth year in a row.

Nadaburg is in Wittmann, in the northwestern part of Maricopa County. The district serves about 900 students in a rural community.

The rural district was one of only a handful of overrides that failed this year, and it failed by the widest margin out of all the districts.

Voters like John Godleske and his wife voted no on the override because they thought the funds would have been more money than the schools needed, and they’re on a fixed income: Social Security.

"It’s not that we want to close the school down or anything, we don’t," Godleske said. "We did read about the buses and everything else, they wanted to replace all the buses new, which we didn’t feel was right."

Stephen said the district would have replaced two buses per year if the override passed.

The funding would have also gone to upgrading the school’s technology. That technology includes 15-year-old computers and iPads the school has on grants, which Nadaburg technology instructor Holli Taylor said are almost useless because there is no WiFi in many of the classrooms

"Our superintendent has been creative, and we've tapped as many grants as we can," Taylor said. "A lot of grants are for components but the pieces that we need to run the systems aren’t there."

Not only is the technology outdated, it also becomes a difficulty in the age of online testing, like the AzMERIT test. Those scores came out earlier this week.

"That would be the part that would be the hardest, is a kid would be typing their little heart out they read every piece they hit submit and it crashes, and they’d lose everything," Taylor said. "And to motivate a kid to go back and redo everything they’ve done? And say, 'oh that's just how it goes'? That's not what you want to say."

Taylor said this young generation learning technology now is facing a future that includes technology as a huge part of their career.

"There’s a lot of shifts in technology," she said. "We’re going away from basic application to the maker spaces and the kids creating and developing. They’re saying by the time these kids graduate 75 percent of the jobs will be new and things we didn’t anticipate, so how are we preparing them for that?"

Other district resident Mark Bailey doesn’t think that’s what the money will go to. There was a tax mistake that overcharged district voters a few years ago.

Stephen thinks it will take time to build a relationship with with voters to gain their support.

"The thing is, I think people don’t trust us," Stephen said. "We do get a lot of support from the community but maybe there are some things that happened in the past that maybe they can’t get over."

Taylor, who is also a parent in the district, thinks maybe the separation in the neighborhood has lead to a disconnect between voters, teachers and the school's impact.

"My husband and I are from a rural, up-north community where they have the parades and all the big community events, and I just don’t see that in this community," she said. "I think that if we start to bring back the sense of community, that could bring changes. That’s what we really need, that community support and that rural town sense."

Stephen said with this year’s expenditures so far, the capital funds from the state are already down from around $200,000 to about $20,000.

So, if a bus breaks down or the servers fail, the district might have to take from the budget that goes to teacher’s salaries. Stephen said he doesn’t know if an override will be on the ballot next year.