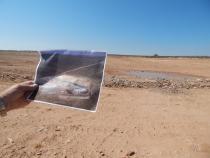 (Photo by Melissa Sevigny - KNAU)
Donn Pillmore holds a photograph of what Kanab North looked like when it was active. 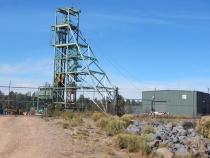 (Photo by Melissa Sevigny - KNAU)
The headframe and warehouse at Canyon Mine.

Nuclear power has gained more attention as a clean energy source. The raw material needed to make that power is uranium; and the highest-grade uranium deposits in the nation are near the Grand Canyon. The federal government has halted new uranium mining in the region — but old mines can still reopen.

Critics call them “zombie mines.” It’s just what it sounds like — they shut down, lay dormant for years, and rise back up again. Canyon Mine is one of them. It’s located on the Kaibab National Forest, not far from the highway tourists take to visit the South Rim.

I was standing in front of the locked gate. I couldn’t get any closer — the company cited safety reasons. Geologist Matt Germansen came out to meet me. He pointed to a metal tower where two wheels spun at the top.

“That’s the mechanism that allows the buckets to carry the material from underground to the surface,” Germansen said.

Right now, that material is just waste dirt. The miners have dug a few hundred feet. They’ve got a lot farther to go to hit uranium ore. “We’re heading down to somewhere around 1,200 feet,” Germansen said.

Canyon Mine was partly dug in the 1980s, but it shut down in the early '90s when uranium prices dropped. A few months ago, the company that owns the mine started to dig again. Some are concerned about this renewed interest in uranium. Representatives of native nations spoke out against uranium mining at a recent press conference.

Carletta Tilousi is a Tribal Council member for the Havasupai who lives not far from Canyon mine.

“We fear that our water will be contaminated and we can no longer consume the water. And it will lead to deaths and cancer, and affect all animal and human life,” Tilousi said.

Three years ago, the federal government put a 20-year ban on new uranium mines in the Grand Canyon area. Older mines, like Canyon, are exempt. The idea was to give scientists more time to investigate.

“From a scientific perspective, is there an impact that’s going to harm environment or harm people?” said Donald Bills, a hydrologist with the U.S. Geological Survey (USGS). “What evidence is there to support that impact? We’re still in the process of building a database that will provide that kind of evidence.”

Here’s what scientists know so far. The USGS found 18 springs in the Grand Canyon with too much uranium to safely drink. That’s about 6 percent of the sites analyzed. It’s often not clear if the pollution is natural seepage from rocks or related to mining activity. Mines do have elevated concentrations of uranium, but it tends to not move very far.

There are a lot of unanswered questions.

Anne Mariah Tapp of The Grand Canyon Trust said any risk is too high.

“We don’t know 100 percent what is going to happen with the groundwater in the Grand Canyon with regard to uranium mining,” Tapp said. “And because we don’t know, we should not threaten that precious resource until we have it figured out.”

The Grand Canyon Trust wants activity at Canyon Mone to halt until the U.S. Forest Service completes new environmental reviews. But for now, Canyon and other so-called “zombie” mines can operate under old permits.

Eventually, all of these mines must be reclaimed. Donn Pillmore gave me a tour of Kanab North, on the North Rim of the Grand Canyon, which is undergoing reclamation now. Pillmore works for Energy Fuels Resources, the Colorado-based company that owns Kanab North and Canyon mines. “At this time, all of the contaminated material has been eliminated from the site,” he said. “So what you’re looking at is the re-contoured mine site that’s just about ready for seeding.”

Desert shrubs will soon cover the site. Once Canyon mine is depleted, it’ll go through the same clean-up process. Pillmore said his company will then look toward other uranium claims made before the 20-year ban. He expects worldwide demand for nuclear power to rise.

“So I think they’ll be a point when we see the price of uranium move up to where it needs to be for a lot of our operations to turn back on,” he said.

If that happens, Pillmore said the company might mine out all of their old claims before the ban on new mining is over. The mining industry wants to end the ban early, while critics hope to make it permanent.