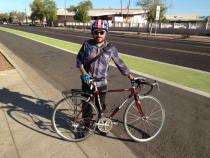 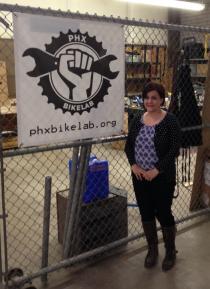 (Photo by Nick Blumberg-KJZZ)
Phoenix Spokes People's Lisa Parks inside the Phoenix BikeLab where she works.

The city of Phoenix is in the last stages of putting together a huge document, outlining its plans to make getting around on a bicycle easier and safer. It will address infrastructure for bikers and the relationship between bikes and cars.

At 7 a.m. at Shine Coffee in midtown Phoenix on a recent Friday, a group has gathered as they do each week to bike to work together. The ride's organized by the advocacy group Phoenix Spokes People. (Get it?)

Computer programmer David Tapley is one of them. He started biking when he moved from the U.K. and is always shocked that more Phoenicians do not do it.

"Because it's huge, parking lot-sized roads, it's perfectly flat everywhere, and it never rains," Tapley said. "You couldn't ask for a better setup. And yet for many people, it's totally alien."

And Libby Coyner said part of that is because of gaps in the system.

"We have a lot of bicycle infrastructure that kind of starts and stops abruptly, and doesn't really connect people to where they need to go," Coyner said. "I think that's part of what's kept ridership really low."

Boosting ridership and increasing connectivity are two of the big goals of Phoenix's Bicycle Master Plan. So too is making the ride safer. The city's bicycle coordinator Joseph Perez told me about a recent analysis of five years worth of collision data.

"We have about 450 to 550 bike crashes a year, and what we're finding is that more than 75 percent of our collisions occur within 150 feet of an intersection," Perez said.

The city is looking at taking bike lanes all the way up to the crosswalk and making sure that the lane continues on the other side of the intersection. Phoenix has also started adding lanes in busy areas with lots of collisions, like along Indian School between 19th Avenue and Interstate 17.

And the city is trying some bolder concepts, like along the stretch of Grand Avenue where Perez and I met, between 7th and 15th Avenues.

The city's plan will call for relatively easy projects like more bike lanes. But Perez is also looking at bigger projects, like bike lanes with a physical barrier between bikers and drivers or reducing the number of vehicle lanes on certain streets. The idea is to create a city where you can bike just about everywhere.

"We're going to have the day where you can just get on your bike and not have to worry about planning that route, 'Okay, where am I going today and how am I going to get there?' You can just ride," said Parks.

She said she usually feels safe when she's out riding. But bike safety is not just about infrastructure, it's about drivers being aware of riders. Sometimes, people in cars do not see Parks on her bike.

"And even though I might be wearing bright clothing, I've had my lights on, I could have streamers all over the place, they won't see me because they're looking for cars and they're not looking for a bike," Parks said.

But Parks said if there are more bikes on the road, it will teach drivers in Phoenix to watch out for them.

Just about everyone I spoke to extolled the virtues of biking as a way to save money, stay healthy, reduce congestion.

"Admittedly, I'm a bit biased, but there aren't a lot of things I can see that are really negative about bicycling," said Bob Beane, president of the Coalition of Arizona Bicyclists, "and I think Arizona is just kind of lagging."

Still, Beane sees opportunities. He said several of Arizona's cities have been ranked by a national group as being bike-friendly and that Phoenix and Glendale got honorable mentions. Beane said if those two cities improve, Arizona would become the state with the highest percentage of the population living in a bicycle-friendly community.

"We are just such a car-dominated city," said Coyner.

But she thinks that can and should change.

"I just think everyone should be on a bike here. I think it's ridiculous that people aren't riding. That's my last word!" Coyner said.

The city of Phoenix plans to release the first draft of its bicycle master plan this month.

EDITOR'S NOTE: This story has been modified to reflect the bike lanes terminate at the I-17.