Phase 2 Of Light Rail Will Go To Phoenix Metrocenter Mall 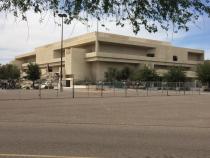 (Photo by Kathy Ritchie - KJZZ)
The Metrocenter Wal-Mart is scheduled to open in mid-2016.

Construction is almost complete on the northwest extension of the light rail, which will run along 19th Avenue starting next March. Then what? The next stop will be Metrocenter mall.

There’s no set date for when Phase Two of the light rail will begin, though it’s looking like sometime in 2023. Once ground breaks, it’ll travel up Dunlap Avenue, head north on 25th Avenue, cross the Interstate 17 and stop on the east side of the mall.

"There are a couple things that are happening in the Metrocenter vicinity, both on the east side and the west side," said Albert Santana, who is with the city of Phoenix. "Obviously the mall is physically located on the west side, but even on the east side there area a lot of educational institutions there, but there are students, which is great for us in the transportation world."

Currently, some 38 percent of light rail users are students, according to Santana. With the construction of a new Wal-Mart, as well as possible housing and medical facilities around the mall, Santana calls Metrcenter a unique area with potential.