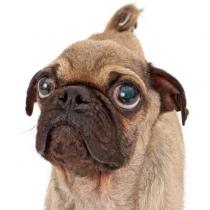 (Photo by A Dog's Life Photography - Courtesy of Arizona Pug Adoption And Rescue Network)
New research show Pugs are very adept at scent detection.
(Photo by Jimmy Jenkins - KJZZ)
Yankee is a K9 officer with the Maricopa County Sheriff's Deparment
(Photo by Jimmy Jenkins - KJZZ)
Aside from scent detection, K9 officers are also used for their strength, agility and ability to intimidate suspects.

The conventional wisdom is that hounds are the top dog when it comes to smelling. Their big noses and low-to-the-ground profile have made them the go to breed for hunters for centuries. Yet German shepherds are the dog most commonly employed by police and military forces around the world for search and rescue work as well as drug detection.

But does their prolific use mean German shepherds have the preeminent proboscis? Nathan Hall is a researcher at Arizona State University’s Canine Science Collaboratory, studying olfactory abilities in dogs. He says he couldn’t find any scientific reason for using German shepherds.

“As far as I can tell, it’s largely the choices have been historical,” Hall said. “There wasn’t really a great olfactory basis or a great sort of study that said ‘This is the best nose – this is our best detector.’”

So Hall decided to find out how German shepherd snouts stack up against the rest of the pack. To establish a baseline, he needed a breed of dog that wasn’t known for their nose.

While pugs are bred and beloved for their companionship qualities, their respiratory capabilities leave something to be desired — or so it would seem.

“They’re brachycephalic,” Hall said of the pugs, which means they have pushed-in faces. “They make those little snorting noises. So they snore a lot. They can have a lot of different sort of breathing problems. A lot of times they’re open-mouth breathers.”

So Hall set up a controlled scent detection experiment pitting the pug against the German shepherd in his lab. The dogs were trained to find anise-flavored samples in a box of pine shavings and the smart money was against the mouth breathing pugs.

“But then once they got up to actually doing the task, their mouths closed and they started breathing really hard through their nose,” Hall said. “It was a very clear switching on and off so they were making very active sniffing responses.”

What Makes A Good K9 Officer?

Ryan Paschke is a K9 Handler with the Maricopa County Sheriff’s Office and his dog Yankee is a Dutch shepherd. Paschke says while scent detection is important, an effective K9 Officer needs more than a good nose.

“A lot of smaller dogs — they’re not going to be able to reach the tops of dressers for the scent detection,” Paschke said. “We also use these guys for our patrol work, so if a bad guy runs from us — gets on top of a house, gets on top of a tall building — he could easily jump a six foot, eight foot wall, no issues.”

Paschke says the intimidation factor is also important. “They have a really mean, aggressive bark,” he said, commanding Yankee to speak.

“So, just that alone, if they don’t see the dog, they hear that bark, they’ll come out of the house a lot quicker than they would without having them there,” Paschke said.

While pugs may not be donning a badge just yet, Hall’s research could lead to more opportunities for the pug. He said the USDA and TSA often use beagles for customs work.

Hall hopes to continue his research with larger trials and more precise equipment to measure the still relatively unknown wonder that is a dog’s nose. He says his research shows there’s potential applications for all breeds and that, just as with people, we shouldn’t make assumptions about a dog’s capabilities.

“Because, maybe our assumptions are wrong,” Hall said.

The Canine Science Collaboratory is presenting this research and more at the Arizona Humane Society on Nov. 7 at an event entitled “Going To The Dogs Too.”