Museum Of Walking Wishes You Would Take A Hike 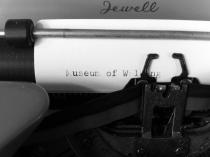 (Photo courtesy of Angela Ellsworth)
The Museum of Walking does everything in analog, including typing out its catalog. 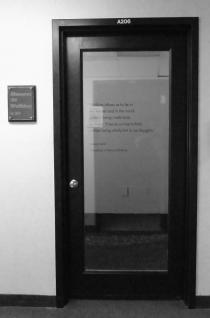 (Photo courtesy of Angela Ellsworth)
The Museum of Walking is currently housed at Arizona State University in Tempe. 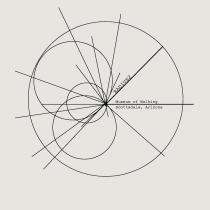 (Photo courtesy of Angela Ellsworth)
From an exhibit at the Museum of Walking.

(Photo courtesy of Angela Ellsworth)
An interesting sidewalk found on a walk. 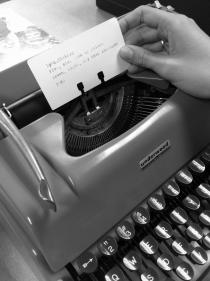 (Photo courtesy of Angela Ellsworth)
A card for the Museum of Walking's catalog, typed out on a vintage typewriter.

Art can be about many things, including finding the beautiful in the mundane. It can also be as simple as just putting one foot in front of the other.

Ellsworth sees walking as integral to her art, and said that walking gives you a different view of the space you are in.

"It’s the experience in the body and it’s experiencing space in a new way," she said. "We can drive by certain shops or certain houses hundreds of times, and until we actually walk along that same route on foot, we don’t see a lot that’s there."

The small museum, currently housed at Arizona State University in Tempe, has events all over town where people get together and walk.

Ellsworth described an exercise she did with a group of people who were interested in walking. "They had to give me their cell phones and I told them to leave the space where we were meeting and go walk for one hour and a half away from that point. And they didn’t have their cell phones, so they had no GPS. They had no maps. They had no phone. They had no time. And it was interesting because one of the first questions was like, 'Well how am I supposed to know the time? How am I supposed to know how to get back in an hour and a half?' And I said, 'There are people in the world.'"

Ellsworth said that one of the things that happens when people start to walk is that they notice people and things they hadn’t before. This is especially true in Phoenix, which is a city that is not particularly walkable.

This is kind of an old-fashioned concept, much like the museum itself.

"Our cataloging system happens on a Roladex. Walking is analog. We like to think – of course we could have a database, a digital database, but it’s been interesting to go back to the analog. For instance, when you come to an opening, there’s a sign on the door downstairs that has a phone number – a land line – that you call, so whoever’s in the museum has to walk down these steps, open the door for the visitor and then come back up."

Is is that connection to the physical experience that makes walking so interesting and important. Ellsworth said that walking can be art, spiritual, or something else.

"Political protests, marches, walking - that is all walking," Ellsworth said. "Socioeconomically, who has to walk? Who walks for leisure or exercise, and then who actually, because they don’t have a motor vehicle or other transportation, has to walk?"

No matter what form it takes, for Ellsworth a new perspective may just be a walk away.

"Just the everyday that we see can be something completely mind blowing and interesting," Ellsworth said.

They say life is about the journey, but sometimes it might just be a walk.