Scottsdale Races Back In Time For Inaugural Grand Prix 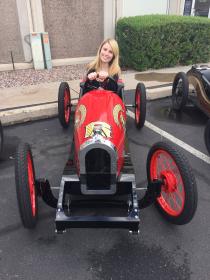 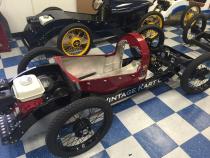 Ladies and gentlemen, start your engines.

The city of Scottsdale is hosting a first of its kind event this weekend.

Its downtown streets will be transformed into a modern-day version of a roaring 20’s raceway, and attendees from across the valley will participate.

The event is the brainchild of Napoleon Smith III, a TV and movie producer who thought the area would make the perfect backdrop for his idea.

“We’re creating a track right in the heart of Scottsdale. (It’s the) most streets ever closed in Scottsdale. Going over the waterfront bridge, going around where Nordstrom is, down Goldwater, we’re passing about 20-25 restaurants. Over 200 businesses will be on the track.”

Smith, who is executive producer of the Teenage Mutant Ninja Turtles franchise, says he became fascinated with the mini-racers and brought the idea to Scottsdale mayor Jim Lane.

"I love Scottsdale. I went to school at the University of Arizona," said Smith. "I went to Mayor Lane — we went to him and said we want to close off all your streets and do a mini-race, and he said, 'Alright — when are we doing our Grand Prix race?”

A total of 40 different one-seat mini-vintage race cars will careen through Old Town, each constructed to replicate roadsters straight out of the roaring '20s.

They’re all being built at a lighting factory in Mesa.

“We have all our designing here in house and it goes right to the machines you see behind you, these laser cutters and we can print out almost 90 percent of the parts for these cars right here in this facility," said businessman Ron Kotloff.

The bustling factory belongs to  Kotloff, who specializes in making lighting fixtures. Until a year ago, Kotloff didn’t imagine he’d be building mini-race cars. Then, Smith and organizers came to him with the idea, and he liked it.

“Vintage cars have been around since the 1920s , and there’s a community out there that builds these in their garage, but there’s no manufacturing anywhere. So, it was a perfect fit for the venue and we decided to start designing them," Kotloff said.

Kotloff said anyone was eligible to sign up to drive the racers, which are being built to fit the streets of Scottsdale, and with safety in mind.

“The course will be barriered, so every sidewalk will have a barrier, so there’s no way a car can go into the crowd. And we have a race team that’s put this (course) together to make it safe," said Kotloff.

The event is not only an auto race, it’s fashion show as well. Spectators are encouraged to show up wearing vintage 1920s' garb and imagine they’re in the streets of an exotic European country.

It’s Gee’s job to design the open air micro-racers that will zoom through the streets of Old Town at speeds of up to 45 miles per hour.

To that end, each vehicle is individually designed as what Gee and organizers call "drivable pieces of art."

“It’s absolutely art. It goes way beyond mini-racers. They’re true pieces of art that will be proudly displayed in places of business. Heck, these things are museum pieces, as far I’m concerned," said Gee.

Nearby residents and businesses shouldn’t worry about their streets being taken over by a full-fledged car race. Scottsdale’s mayor Jim Lane said it’s mostly about the fun and pageantry of the event.

“You could say it far beyond a race, but being technical about it, it’s hardly even a race,” Lane said.

He agreed to host the Grand Prix to help a bring a new crowd to Old Town Scottsdale.

"But it introduces a lot of people who might not otherwise be downtown and wouldn’t have an occasion to come downtown. We’d like to see those events that introduce people to our historic downtown,” said Lane.

Festivities start at 8 a.m. on Saturday, Nov. 7. The 50-lap Grand Prix main event relay will begin at 2 p.m.. The race course measures just under 1 mile and will start and end on the Marshall Way Bridge at the Scottsdale Waterfront.