What Sinema Should Consider If She Switches Districts 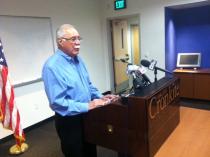 (Photo by Peter O'Dowd-KJZZ)
Congressman Ed Pastor announced he is retiring after a 23-year career.

We start with congressional politics. Last week, District 7 Congressman Ed Pastor announced he would not seek another term.

A number of Democrats, including Maricopa County Supervisor Mary Rose Wilcox and state lawmakers Ruben Gallego and Steve Gallardo, had a pavlovian response to the soon-to-be open seat and said they would be running to succeed Pastor. Then things got complicated, as word spread that Congresswoman Kyrsten Sinema, who represents the swing ninth district, was considering jumping into the seventh district race.

Democratic political strategist Bob Grossfeld and Republican communications consultant Jay Heiler offer their opinions on what Sinema needs to measure before she makes her decision.