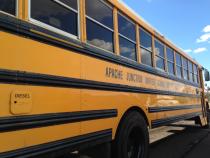 (Photo by Alexandra Olgin - KJZZ)
The Apache Junction district expects to save $150,000 on food service, transportation and utilities by moving to the four-day week.

Apache Junction Unified School district is one of a handful of districts that appear to be losing override and bond elections. To cope with previous budget cuts, the district had moved to a four-day school week this year.

This is the fifth spending increase Apache Junction residents have rejected in the past eight years, so this didn’t come as much of a surprise to Superintendent Chad Wilson.

“The money hurts,” he said. “But the punch in the gut that the majority of the community does not seem to support us or education is way more problematic.”

The override would have provided the district with $3.5 million to help reduce class sizes, raise teacher pay and lower the cost of pay-to-play sports.

A group of parents, teachers and other residents had canvassed and called voters for months in support of this override. One of the reasons for the push was because the spending increase would have allowed the district to consider returning to the five-day week schedule. Mesa Public Schools, the biggest district in the state, neighbors Apache Junction to the east.

“Our neighboring districts have more financial resources to run their business than we have," Wilson said. "I believe the failure of the override makes it that much more problematic for us to move forward competitively.”

Wilson expected this 4,500-student district to lose several hundred students this year, partially because of the four-day week and elementary school closure.