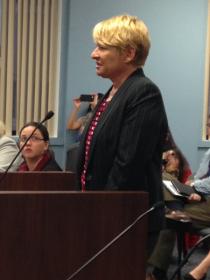 (Photo by Alexandra Olgin - KJZZ)
Dr. Karol Schmidt told the Board of Education she is ready to transition to a job in public service.

The Arizona State Board of Education has hired a new executive director. Dr. Karol Schmidt was confirmed with an 8-1 vote at Tuesday’s meeting.

Schmidt will be leaving Grand Canyon University to join the board.  She will replace Christine Thompson who was caught in a legal dispute about whether the board has the power to hire and fire employees. A Maricopa County Superior Court Judge refused to rule on that question because she said it was a political issue. That case is pending appeal.

Diane Douglas still firmly believes that as the superintendent of public instruction, she has that authority.

Board president Board Greg Miller disagreed: “Again, I point out that’s your opinion and not ours. Nor is it our legal counsel’s opinion.”

Miller said, “No.  It’s just your interpretation of the law.”

Douglas responded, “I can read it.”

Douglas had threatened to file a second lawsuit against the Board of Education in September if they went through with this hiring process. Her attorney said it’s too early to comment, but he will discuss with Douglas how to proceed over the next few days.

Since Douglas was elected a year ago, the Department of Education and the Board of Education have spent more than $145,000 combined on these legal battles.