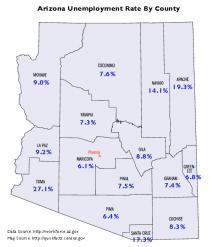 The job outlook for Arizona is improving, especially for those out of work or underemployed. But rural parts of the state are being left out.

Research firm Moody’s Analytics is projecting the state should see the second-highest rate of job growth in the nation this year. New high-tech jobs are coming to the Phoenix metro region, as are new positions in healthcare and construction. But is that translating to more jobs in rural Arizona?

“In large part, it is not," said James Jayne, the Navajo County Manager.

He said rural Arizona is being forgotten, due to jobs going to the state’s metro areas and an underqualified work force that can’t afford new job training.

“It’s a challenge to make a living up here. You know, if they want to go to college — beyond community college — they’re leaving here," Jayne said. "And, then, what are your other job prospects here, if they want to come back home? And currently, there isn’t any.”

Moody’s predicts 77,000 jobs will be added to the state’s economy this year, mainly in Maricopa County.