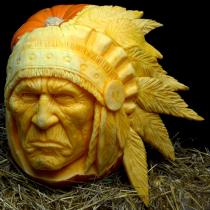 With Halloween approaching, pumpkins are everywhere. The Valley is home to one of the world’s most accomplished pumpkin carvers, and his unique artwork is on display in Carefree.

Ray Villafane recently explained his craft to dozens of school children on a field trip at Carefree’s town center.

“I’m making up this face out of my head,” Villafane said. “I play with pumpkins, really. I don’t even really feel like I work. I honestly don’t. No matter how many hours I put in, even if I’ve put in a long day of pumpkin carvings, all I need is to be confronted with a really good pumpkin, like a heavy pumpkin or a thick pumpkin, and I want to carve some more."

One of his latest creations features a gnome-like creature’s face etched into the side of a perfectly plump pumpkin.

“I love carving faces, first and foremost. I want the pumpkins to look like they’re alive, looking back at you.”

The first and second graders, visiting from Desert Sun Elementary, were enraptured by the carved pumpkin heads displayed throughout the park. Villafane said it’s all about the subjects and not the artist.

“Walk through an airport with a pumpkin, and see what happens. You’ll get more smiles than anything. There’s something magical about a really cool looking pumpkin.” said Villafane, who is 46 years old. “Put a face on it, and you don’t have to do anything. I could have sat up there and not said a word, and they would be captivated.”

Villafane's life-like depictions come in all shapes and sizes. Ever since his carving work was featured on the Food Network, he’s traveled around the world to show off his creations and has become known as the pumpkin sculptor to the rich and famous.

Villafane, who just returned from Washington D.C. and carved a pumpkin seen on Monday Night Football, lives in Surprise. The Town of Carefree discovered his work and invited him to show it off at the town’s Enchanted Pumpkin Garden.

“We sat down; we said we’d like to get a pumpkin carver, and people yawned. Then, they said 'let us show you what he can do and what he’s has done,' and everyone says 'Wow, that is really something!'” Said Les Peterson, Carefree’s mayor.

As hundreds of people crowd his town center, Peterson said his appearance has been a boon to tourism, with visitors coming from around the state and region to see the great gourds. But this art is only temporary. His carefully carved creations, which take hours to perfect, only last a couple days. Villafane said the fleeting nature of the carvings is the beauty of the artform.

“When it rots, when it’s gone and only when it's gone do you really begin to fall in love with this medium. Once it’s taken away, it’s only human nature to romanticize that experience even more,” Villafane said.

Temporary or not, each creation is immortalized in photographs. Villafane can fetch a pretty penny for each carving. His services cost about $2,000 per pumpkin. This time of the year, the requests are plentiful.

“Often one of the biggest requests is, ‘Can you do our news anchor people?’ and not to (mean) any offense to the local news, but I don’t do that,” Villafane said.

“I’m so addicted to playing with pumpkins because I’m having so much fun playing, it just opens up more opportunities because I just find myself diving in deeper and seeing the pumpkins in different ways,” he said.