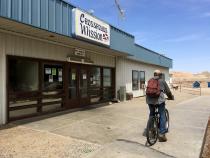 Injury and illness led Victor to Crossroads Mission — a group of tidy, mismatched buildings that serves as a homeless shelter in Yuma.

He couldn’t return to work in the lettuce fields or packing produce. His family has been homeless, off and on, for the past couple years.

“I couldn’t be in the heat, and I would get really exhausted,” Victor said. “What we’d do is just go to the park and stuff.”

The August day I spoke with him at the shelter, it was 109 degrees outside. The air conditioner was working hard.

During a short hospital stay, a worker suggested he try one of the six cooling sites available through the Yuma Heat Relief Project. These community organizations — including Crossroads Mission — provide water and an air-conditioned space during the hottest parts of the year.

This can be a long stretch in Arizona. For example, Phoenix and Yuma see more than 100 days per year with triple-digit temperatures, on average.

“Here in the desert cities, it’s a problem of chronic heat,” said Sharon Harlan, a sociology professor at Arizona State University. “So from May to September, we have very high temperatures that are dangerous almost every day for people who would be exposed to the outdoors.”

She said the problem of chronic heat stress is somewhat overlooked.

“One of the things we get caught up in here in desert cities is that the paradigm for heat danger is really based on a model that applies to cities in the Midwest and Northeast where heat is a periodic, episodic concern,” Harlan said.

Since 2011, more than 2,000 people in Arizona each year visit the emergency room for heat illness. Many more people report feeling health effects from heat, based on surveys Harlan and others have conducted.

Arizona also leads the nation in heat deaths during the summertime almost every year, according to data tracked by the Centers for Disease Control.

Not just the very young or very old are at risk. Many working-age individuals, like Victor, succumb to heat illness. In fact, heat deaths in Arizona spike for people between the ages of 20 and 55.

“So what we need to create from a public health standpoint is a different mental model about how people should think about the dangers of heat,” Harlan said.

For a decade, Harlan has looked at the cause and effect of high summer temperatures on low-income areas in Phoenix.

Heat illness hits poor neighborhoods the hardest, said Harlan, adding that low-quality housing and lack of effective indoor cooling contribute to the problem. Even the outdoor environment tends to be hotter in these areas, with more concrete and less shade.

Harlan said efforts to address problems with heat will need to address inequality.

“Many of the programs that need to be in place have to do with reducing poverty, improving housing quality, regulating the rules for access to electricity and power so that electricity cannot be turned off for nonpayment in these periods of high temperatures,” Harlan said.

Her list continues. She’d like to see irrigated vegetation to help reduce outdoor temperatures in these low-income areas. Harlan said it is also important to operate cooling centers that people are aware of — where they are and when they’re operating.

Barbara Rochester, public relations director for Crossroads Mission, said with up to 100 people at the shelter during hot days, demand is high. Some stay the night, others return home once the sun begins to set.

“It’s been so hot this summer, and it’s been hard on everybody,” Rochester said.

The situation can seem a bit grim looking forward. The National Oceanic and Atmospheric Administration said 2015 may be the hottest year on record. And in a 2015 report from Arizona State University and the Arizona Department of Health Services, greenhouse gas modeling indicates the state’s climate may become even warmer over the next several decades.

But for now, for Victor, he’s trying to make the best of his situation at the shelter. He said the heat provides a certain sense of camaraderie.

“Everybody starts discussing the stories out there, and having a good time,” Victor said. “You know, even if they’re depressed, it gets them happy.”

And as temperatures begin to cool this fall, his goal is to get back to work.