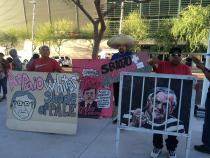 Jude Joffe-Block/KJZZ
Sheriff Joe Arpaio protesters outside of the federal courthouse on Oct. 2, 2015.

During the first several days of the contempt hearing against Maricopa County Sheriff Joe Arpaio, the courtroom was full and a couple dozen of anti-Arpaio protesters gathered outside chanting with colorful signs.

By now there have been 14 days of testimony. The protests have slowed, and once Arpaio stepped down from the witness stand earlier this month, the courtroom benches emptied out substantially.

But a handful of courtroom regulars make a point to come and listen to as much of the testimony in the contempt case as they can. One is Salvador Reza, an activist who for years has advocated for day laborers, and against Arpaio and his immigration enforcement tactics.

“To me, it is funny to see how karma comes around,” Reza said while eating lunch in the courthouse earlier this month. “And everything [Arpaio] has done to so many people, and now he is on the opposite side.”

Reza has been in court when the judge in the case, U.S. District Court Judge Murray Snow, directly questioned both Arpaio and his chief deputy, Jerry Sheridan.

“When the judge has them against the wall, their face gets all red,” Reza said. “So I wonder what they are going through. I am sure there is fear inside of them.”

There have been two rounds of contempt hearings, the first was in April, and the current one began in late September. The plaintiffs have called several Maricopa County Sheriff's Office personnel to testify. Sometimes witnesses have remained on the stand for days.

Snow is evaluating whether the violations of his orders were willful, and whether to refer the case to a prosecutor to pursue criminal contempt charges.

Another courtroom regular is activist Lydia Guzman, who helped bring the successful racial profiling lawsuit against the sheriff.

“If I’ve missed one court date it was probably because I was really, really sick,” Guzman said outside of the federal courthouse recently. That includes the status conferences in the case.

One of the points the plaintiffs’ lawyers are trying to prove in this contempt hearing is that there are deficiencies in how the sheriff’s office disciplines officers for misconduct and handles citizen complaints.

Guzman has been listening to that part with interest, since she’s helped Latinos who said they were missing money after an arrest file complaints with the sheriff’s office.

“A couple of them, I actually recognize the names, I recognize the incidents,” Guzman said. “Hearing them discussed, I kind of know, a) it fell on deaf ears in the sheriff’s office, and b) they are not falling on deaf ears here in the courtroom.”

Some of the other regular attendees include a few of the sheriff's other most vocal critics, such as former County Supervisor Mary Rose Wilcox, former state senator and Maricopa Community College District governing board member, Alfredo Gutierrez, and political artist Rob McElwain, who is often sketching in court.

Arpaio has some supporters in the courtroom, as well. One man who refused to give his name for this story said he comes to court because he feels like Arpaio is being unfairly “dragged through the mud.”

Sid Apps, a former member of the Fountain Hills Town Council, said he shows up to the contempt hearings as a “concerned taxpayer observing how my taxpayer dollars are being wasted.”

Apps said he supported Arpaio back in 1992 during his first run for sheriff, but he said he believes the sheriff’s ego led him astray. Apps said it is disappointing that taxpayers are having to foot the bill for the sheriff’s missteps — first for the original racial profiling finding against the sheriff in 2013, and then for this contempt of court case when the sheriff violated the judge’s orders.

“My God, and this money we are spending?” Apps said during a break in testimony recently. “How many library books — how many libraries — could this build?”