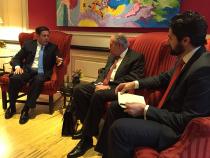 (Photo via azgovernor.gov)
Arizona Gov. Doug Ducey on a trade mission to Mexico in June 2015.

Arizona business leaders are hailing a new era of cooperation with the state’s largest partner, Mexico.

Gov. Doug Ducey has traveled to the country 13 times since taking office earlier this year, many of those visits on trade missions.

Steven Zylstra of the Arizona Technology Council said those missions have paid off. He believes they’ve succeeded in getting the state back in good graces south of the border after the bad blood of SB 1070 signed by previous governor Jan Brewer.

“We have a very business-savvy governor. He understands that those things can get in the way of good relationships and partnering. And I think we have a whole new situation in Arizona," Zylstra said.

Zylstra’s Arizona Technology Council recently announced a new cooperative agreement with tech incubator Startup Mexico that will focus on creating connections between startups and investors in markets on both sides of the border.