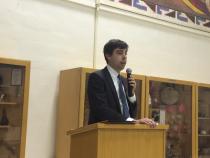 (Photo by Jude Joffe-Block - KJZZ)
Paul Killebrew of the U.S. Department of Justice civil rights division spoke at a community meeting in Guadalupe on Wednesday. 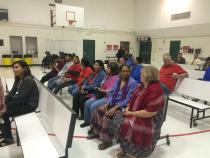 (Photo by Jude Joffe-Block - KJZZ)
Community members gathered in Guadalupe to learn about court-ordered reforms at the sheriff's office.

Some 50 community members gathered in Guadalupe on Wednesday night to hear about the Maricopa County Sheriff’s Office progress complying with court ordered reforms due to a federal racial profiling lawsuit. The meeting was led by Chief Robert Warshaw, a former police chief appointed by the court to monitor the sheriff’s compliance.

Representatives of the U.S. Department of Justice (DOJ) civil rights division also attended the meeting and addressed the public. The DOJ had its own lawsuit against the sheriff’s office and Maricopa County, which it settled this summer.

Now the DOJ has intervened in the class action racial profiling lawsuit litigated by the American Civil Liberties Union in Snow’s courtroom. The DOJ’s role is to help ensure the sheriff’s office complies with court orders.

The town of Guadalupe contracts with the sheriff’s office for police services. But there is a tense history between the agency and the town residents, who are mostly Mexican and Yaqui. Many were impacted by the sheriff’s immigration sweeps.

Vice Mayor Andrew Sanchez expressed a different concern at the meeting, however. He said he feared that as a result of the racial profiling suit, sheriff’s deputies weren’t being aggressive enough against crime in Guadalupe.

He said he was particularly concerned since there were two recent murders in the town.

“[Deputies] don’t want to get sued and pull over the wrong person and say they are racial profiling,” Sanchez said. “And yeah it is hard in a community that is 99 percent, you know, tan or brown to not suspect that when these sheriffs have already been branded as racial profiling.”

Sanchez said he was concerned it is harder for deputies to do their jobs.

“I support the lawsuit but now I want to see something done where communities like ours, criminals don’t think they can do whatever they want,” Sanchez said.

But Warshaw, the court monitor, disagreed with the way Sanchez had framed the issue.

“Your concern that deputies would be afraid to perform their duties is not a truth that we embrace,” Warshaw said. “Constitutional policing and good policing go hand in hand. In democracy they are a necessity.”

MCSO Chief David Trombi, who attended the meeting, said it was unacceptable for deputies not to do their jobs. He said he believed deputies will do an even better job once they are wearing body cameras, which is one of the court-ordered changes. The sheriff’s office will begin rolling out the body cameras to deputies in the coming weeks.