After SB 1062 Backlash, Gay Rights Advocates Help Businesses Declare They Are Open To All

(Photo by Nick Blumberg-KJZZ)
Fastsigns on Central owner Scott Koehler put this sign up on the side of his business Saturday. 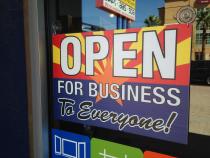 (Photo by Nick Blumberg-KJZZ)
These signs are being posted by some businesses in response to SB 1062. 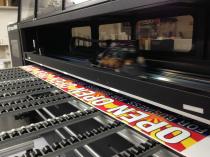 (Photo by Nick Blumberg-KJZZ)
Fastsigns has printed up hundreds of free signs for Phoenix businesses.

Protesters again gathered at the State Capitol on Monday evening in response to SB 1062, a bill that would protect businesses that refuse service to gays and others based on sincerely held religious beliefs. Since Saturday, gay rights advocates have been out distributing hundreds of free signs that let businesses declare they are open -- to everyone.

Inside Fastsigns at Central and Virginia Avenues in Phoenix, the massive printer has been working overtime. Owner Scott Koehler said he was disappointed the legislature passed SB 1062. So Saturday, Koehler did what he is good at ... he made a sign. A really big one.

Now, Koehler's shop is hard at work printing up smaller signs businesses can display. They read "Open For Business To Everyone!" Saturday, Fastsigns made 400 of them. Volunteers from the LGBT business group ONE Community canvassed Phoenix handing them out.

"In about five hours, they'd given out all 400, and they're like, 'We need more!' So then we came in (and) we printed another 400 yesterday that went out, and then we've started printing them again this morning because the demand has been high," Koehler said. "I had a guy come in who drove up here from Casa Grande so he could get some for him and his neighboring businesses."

"These bills were obviously fast-tracked. I think the business community was hopeful that they would go away," said Angela Hughey, ONE Community's president. When 1062 didn't go away, reaction was swift.

"Every major business organization in the state of Arizona has now come out requesting that the governor veto SB 1062," Hughey said.

Conservative lobbying group the Center for Arizona Policy was instrumental in getting the bill through the legislature. The group did not respond to an interview request in time for this story. Speaking last Friday after the bill passed, CAP's President Cathi Herrod pushed back against claims that 1062 is anti-business.

She has accused the bill's opponents of fear-mongering and has said the backlash shows that hostility against people of faith is very real.

The bill's sponsor in the state Senate, Steve Yarbrough, has accused Democrats of misleading the public about what effect SB 1062 would have.

At Los Olivos Hand Car Wash at 3rd Street and McDowell Road on Monday, workers vacuumed out dog hair and food crumbs and sprayed down cars covered in that familiar desert dust. Owner Coletta Spurling picked up several "Open for Business to Everyone" signs that morning.

"We're in the downtown area and we have a lot of gay and lesbian customers, and they're awesome customers!" Spurling said. "We just want people to know that we're out there for them."

ONE Community's Angela Hughey worries that if the Governor signs this bill, it could have long-lasting effects.

"We're all so excited about the fact that Apple and Google are coming to the East Valley, but fantastic, wonderful businesses such as them will not be able to attract and retain top talent if we are not a state that is fully inclusive," Hughey said.

While three Republican state senators who voted for the bill now say they've changed their position, the Senate president reportedly declined to hold another vote. The governor has until Friday to decide if she'll sign it into law.