Group To Recall Diane Douglas: We Have 100,000 Signatures So Far 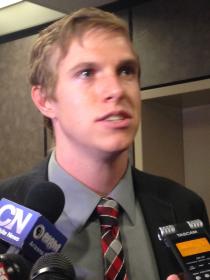 (Photo by Alexandra Olgin - KJZZ)
Max Goshert is chairman of the Coalition to Recall Diane Douglas.

One month into the effort to recall state schools chief Diane Douglas, advocates say they’ve gathered 25 percent of the signatures they need.

The group has more than 1,000 volunteers around the state collecting signatures.

Max Goshert with the Coalition to Recall Diane Douglas said preliminary counts show the coalition has collected about 100,000.

“We’re right on track based on the amount of feedback we’ve gotten from our volunteers and the activity that we’ve been measuring going on,” Goshert said.

In order to force a recall election, the secretary of state’s office needs 366,000 valid signatures by the end of the year.