Metro Phoenix Cities Encourage Homeowners To Scrap The Lawn, But Is It Worth It? 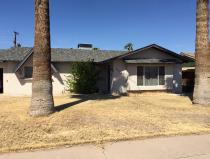 (Photo by Tracy Greer - KJZZ)
Tracy Greer's Scottsdale lawn before it was removed.

(Photo by Jacob Pomrenke)
Tracy Greer's Scottsdale yard after the lawn was removed.

Forget dried up reservoirs or fallow fields. The dying lawn persists as one of the most potent cultural symbols of water scarcity in the Southwest. Typically, more than half of a household’s water in Phoenix goes to its grass.

In recent years, Arizona has watched closely as Californians have wrestled with the consequences of a devastating drought, ripping out lawns and implementing unprecedented water conservation measures.

So far, Arizona has not felt the same pressure, mostly because the state planned ahead: protecting aquifers in the metro Phoenix area, reusing much of its treated water and emphasizing conservation.

But with a major water deficit expected — anywhere from 1 to 3 million acre feet over the next 50 to 100 years — those choices could be on the horizon.

Given that prognosis and the state’s history of water awareness, why does the classic lawn still have such a hold in the Valley?

To begin, I asked someone in the throes of that very process.

“We are in day two of a project that we are calling 'get off my lawn, lawn,'” said Tracy Greer as she stands among the remains of what was once her green backyard. Workers pass by pushing wheelbarrows stacked high with rocks.

Full disclosure: Greer is the managing editor at KJZZ. But today she’s a Scottsdale homeowner overseeing the conversion of her backyard from grass to rock. The rationale for Greer’s move away from turf is part conservation and part convenience.

“I’ve had to repair the sprinkler heads that get broken or bust off. We’ve had leaks at the sprinkler valve. I’m just tired of dealing with it, so we’re pulling it all out,” said Greer.

It’s no small home improvement project: weeks of planning, shopping around and a projected price tag of $10,000, all to put down rocks.

Luckily, like many cities in the Valley, Scottsdale offers rebates. Over the life of its program, people have converted more than 1 million square feet of yard to desert landscape in Scottsdale. For Chandler, that number is more than 3 million; Tempe 5.5 million; Glendale about 2 million. One of the cities without a lawn rebate program, however, is Phoenix.

“We don’t focus so much on short-term water use restriction with our customers. We’re really playing for the long game,” said Kathryn Sorensen, who’s the director of the Phoenix Water Services Department.

She said the city doesn’t feel the need to offer lawn rebates because, instead, they want to encourage what she calls a “culture change.”

“Fortunately, our customers have embraced a desert lifestyle, and you can really see that in the transition throughout Phoenix from very lush types of landscapes to much more xeriscape, and an acceptance of the iconic and beautiful landscape of the Sonoran desert," said Sorensen.

Xeriscape — not to be confused with “zeroscape” — is a low water landscaping technique that generally includes native plants and rocks.

Indeed, residential water usage in Phoenix has dropped about 30 percent over the last two decades. A study, conducted by Phoenix, of about 800 single family homes shows that about 80 percent have some degree of desert landscaping. While lawn rebates can be one tool for conservation, said Sorensen, it can be an uncertain investment and the City doesn’t necessarily believe everyone should remove their lawns. “What we want to do is to encourage families to have a landscape that’s functional. We want it to be water smart and efficient,” she said.

Of course, some argue the lawn is arguably the obvious, most public place to start. Las Vegas, for example, has a robust lawn rebate program, ordinances that prohibit turf at new homes and also financial penalties for careless watering.

According to SNWA, the Las Vegas metro area is collectively saving about 9 billion gallons of water annually from its rebate program.  But making this broad ranging conservation strategy work required all the municipalities and water agencies getting on board, said Bennett.

“If people perceive there’s an inequity, that the guy on the other side of the street is allowed to do something different or less restrictive, they are not likely to participate in your efforts. They’re likely to try to undermine them because they feel it’s unfair,” he said.

That coordinated approach could prove difficult in central Arizona, with more than 20 cities and a patchwork of rules.

Ray Quay is with the Decision Center for a Desert City at Arizona State University. He cautioned that scrapping lawns can also have negative side effects — a drop in property value, an uptick in the urban heat island effect and a loss of flexibility in the overall water supply.

“Turf can be, in some ways, a management tool, somewhat like a reservoir in a way,” said Quay. “Where if you’re in a drought condition you can stop using it, give up some of the benefits, and then go back to it [later].”

Quay also points out that not all cities have the same water portfolio, so removing lawns doesn’t always translate into actual water savings. For cities that use groundwater, reducing residential water usage will have an immediate, direct impact on how much is pumped. The same goes for cities that draw upon the Colorado River via the Central Arizona Project and can put excess water in the ground for future use.

According to the Arizona Department of Water Resources, Arizona has about 9 million acre feet of water banked up.

But for other supplies, such as Salt River Project (SRP) water, Quay said the rights are tied to demand.

“As the demand goes down, it means, yes, less will come out of the dam and more will stay in the reservoir. But that water is not there for you — anyone who has rights to the SRP water can use that, so the benefit to you is not direct,” he said.

A final, big unknown in the lawn debate is human behavior.

People have to be water conscious. If you replace the lawn with xeriscape, but don’t pay attention to what you’re irrigating, you may actually waste more water.

In fact, Doug Bennettt with SNWA called “the human mind” ultimately the most powerful conservation tool.

EDITOR'S NOTE: This story has been updated to correct the spelling of Kathryn Sorensen's surname.