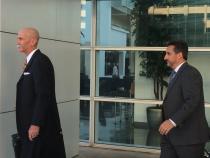 Maricopa County Sheriff Joe Arapio was called to testify late Wednesday afternoon in the contempt of court hearing against him. He last testified in the case in the first round of hearings in April.

The questions from the plaintiffs’ lawyers focused on the violation by the sheriff's office of the court's 2011 injunction to stop enforcing federal immigration law. The order — which MCSO disobeyed — meant deputies were forbidden from detaining immigrants just for being in the country illegally.

The contempt hearing will determine whether that violation of the court’s orders and others were willful.

Plaintiffs lawyers played for Arpaio a number of his defiant TV appearances. While the dates were not clear, they appeared to have been taped in 2012 when the sheriff was running for a sixth term.

In one video Arpaio seems to be reacting to the U.S. Department of Justice’s lawsuit alleging he discriminated against Latinos.

“I’m not going to give it up, I am going to continue to enforce state laws and federal laws, and I look forward to going to court,” Arpaio said in the clip. “Then we can put our case out, then they can stop these press conferences and stop embarrassing me in an election year.”

On the stand Arpaio said he was referring to enforcing Arizona state immigration laws, such as the anti-human smuggling law and the employer sanctions law.

When plaintiffs’ lawyer Stanley Young pointed out the quote said he was vowing to continue enforcing federal law, Arpaio countered, “If we do arrest people on the state law, they probably had violated a federal law coming across the border.”

After court, Young said his team was trying to demonstrate the sheriff’s state of mind at the time that he violated the 2011 injunction.

“We believe the evidence shows Sheriff Arpaio and others knew what they were doing, the violations were intentional and the court’s remedy should take that into account,” Young said.

But the sheriff’s criminal defense lawyer, Mel McDonald, said when hearings are over there will be evidence the violations weren’t willful, and the videos don’t prove anything.

“Merely because you make a political statement when you are running for election, is not dispositive I think of whether he is disobeying the court order,” McDonald said after court.

The sheriff’s testimony is likely to continue Thursday.

Earlier in the day the sheriff’s current lawyers had a chance to question Arpaio’s former defense counsel, Tim Casey.

The day before Casey revealed he had withdrawn from representing the sheriff because of Arpaio’s resistance to taking direction. He testified the sheriff’s office failed to consult him when they began using a new enforcement tactic that violated the 2011 injunction, and the change was inspired by the upcoming election.

But on Wednesday the sheriff’s lawyers elicited testimony from  Casey about how the sheriff’s office cooperated when he disclosed the 2011 order, and quickly began working to develop a training for deputies.

“Everybody was trying to do their best, [including] counsel, all the different people at MCSO. They were trying to follow the court’s order,” Arpaio’s current civil lawyer John Masterson said during the lunch break.

Casey gave corrections to a sergeant who was developing the training scenarios, but after their email correspondence, the training never actually occurred.

“Nobody says that there weren’t mistakes made, because obviously there were,” Masterson said. “But I think what it is clear, this was not intentional. It was exactly the opposite. MCSO was taking steps they weren’t even ordered to take to try and comply with the order. They just failed, mistakes were made.”

EDITOR'S NOTE: This article has been modified to reflect the correct spelling of John Masterson's name.