Download mp3 (1.63 MB)
Will Stone/KJZZ
Protesters set up outside the courthouse where the contempt of court hearings against Sheriff Joe Arpaio have resumed. 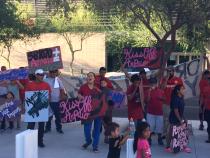 The courtroom was packed Thursday morning as a host of lawyers and community members filed in for the first day of contempt of court proceedings against Maricopa County Sheriff Joe Arpaio after a five month recess. MCSO Chief Deputy Jerry Sheridan spent the entire day on the stand as the first witness.

Sheridan, Arpaio and three others are facing contempt of court for violating U.S. District Court Judge Murray Snow’s orders in a racial profiling case. The plaintiffs’ lawyers are trying to prove they violated those orders deliberately.

Plaintiffs’ lawyer Cecillia Wang questioned Sheridan about the department’s violation of a December 2011 pre-trial order to stop detaining immigrants who could not be arrested on state charges.

Sheridan has testified he did not learn about the order until 2014. Wang tried to poke holes in his argument by pointing to 2012 emails Sheridan received about the order and meetings he attended that same year that discussed the order.

Those communications included multiple emails from the sheriff’s lawyer a month before the November 2012 election, alerting the sheriff’s command staff that the plaintiffs were worried the sheriff’s office was violating the court order and the issue could be damaging in the upcoming election.

But on Thursday, Sheridan still insisted he did not remember ever hearing about the 2011 pre-trial order at the time in question. Wang said after court that she didn’t buy it.

“There is simply no way that Chief Sheridan is believable when he says that he was unaware of the preliminary injunction order,” Wang said. “We walked through many documents showing he received word of it, he received the order itself and he received a lot of information about MCSO’s reaction to it.”

But John Masterson, one of the attorneys representing Sheridan and other MCSO personnel, said after court that Sheridan attends a lot of meetings as chief deputy and can’t be expected to remember them all.

“I don’t remember meetings I went to last week, much less what I did two years ago,” Masterson said. He said Sheridan had delegated the responsibility for dealing with Snow’s orders in the racial profiling case to others.

Wang also spent much of the afternoon grilling Sheridan about the sheriff’s internal affairs division, which is supposed to investigate and discipline employee misconduct. She got Sheridan to acknowledge there is no mechanism in the department to prevent an internal affairs investigator from exonerating a friend as a favor.

She questioned Sheridan’s decision to close internal criminal investigations into whether members of the Human Smuggling Unit were “pocketing” items. The investigation stemmed from allegations from a former deputy in the Human Smuggling Unit and the discovery in 2014 that another HSU deputy, Ramon “Charley” Armendariz, had a collection of drugs in evidence bags, hundreds of IDs and license plates in his home. Armendariz implicated others in the unit before he died of an apparent suicide a few days later.

Sheridan closed the internal criminal investigation against other HSU members on the basis of a memo from Sgt. Dave Tennyson that left out key details. Wang pointed out the memo did not mention that another officer had admitted to bringing some items to Armendariz’s home or the allegation that HSU members had taken a TV from a drop house.

Sheridan defended his decision to close the internal criminal investigation.

“I felt compassion and empathy for the deputy sheriffs in HSU being accused of crimes that we felt did not occur, that the County Attorney did not think occurred,” Sheridan said.

Wang asked if Sheridan was saying that he initiated a criminal investigation even though he believed the allegations were unfounded. That is when the exchange between the two grew particularly tense.

“We didn’t have the probable cause to issue them the Miranda warnings,” Sheridan said. “But we did it anyway because we knew you would be on our ass if we didn’t.”

Sheridan is expected to continue on the stand on Friday.

Before any testimony began on Thursday, Snow denied a last-minute motion by Arpaio’s lawyers seeking to exclude questioning about the sheriff’s confidential informant, Dennis Montgomery. Documents suggest Montgomery may have been trying to link the Department of Justice and Snow himself in an anti-Arpaio conspiracy.

The plaintiffs’ lawyers argued Montgomery was relevant to the case and even intimated there could be issues with how the sheriff’s office paid him.

Meanwhile, outside the courthouse, immigrant rights activists from the group Puente Arizona gathered with signs condemning Arpaio and what they call “his reign of terror.” The group is also holding a “legal clinic” during the Arpaio court proceedings.

Francisca Porchas with Puente said the group is ramping up its outreach efforts, looking for anyone who may have been arrested by MCSO at traffic stops or during worksite raids.

One of the volunteers, Noemi Romero, said she was arrested during a worksite raid in 2013 and eventually detained for several months. Romero said, at the time, she was preparing to apply for the Deferred Action for Childhood Arrivals (DACA) program, but because of her criminal record is disqualified from the program.

The proceedings are scheduled to continue Friday.