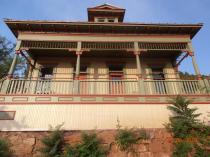 (Photo courtesy of Glenn Odegard)
The John Riordan House is 118 years old and was painstakingly restored by Glenn Odegard. 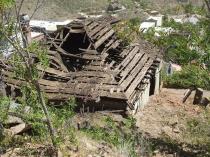 (Photo courtesy of Glenn Odegard)
Glenn Odegard purchased the property in 2012 with plans to restore and rent it to visitors to the historic town. 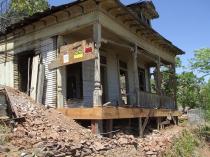 (Photo courtesy of Glenn Odegard)
Odegard and other homeowners named in the suit allege the Town of Jerome Zoning Administrator "changed the rules in the middle of the game."

For the past several months, the town of Jerome has been trying to stop some homeowners from renting their historic homes on a short-term basis.

The town’s current planning and zoning administrator said the vacation rentals are illegal in residential zoning districts. On Friday, the Goldwater Institute filed a lawsuit on behalf of the homeowners at the Yavapai Superior Court. They argue the zoning administrator changed the rules in the middle of the game.

Glenn Odegard bought the dilapidated John Riordan house in 2012 with the intention of restoring and renting it when he wasn’t staying there himself. According to court documents filed by the Goldwater Institute, Odegard checked the town code and the zoning ordinance to make sure such a rental was legal. He also communicated with town officials multiple times, and even obtained a business license issued by the Town of Jerome. Then, in February, he received a letter from the town saying his rental violated Jerome’s zoning ordinance.

"I think the political climate in the small town just changed where some of the citizens were concerned every house would turn into a vacation rental rather than just the few that are there now," Odegard said.

Now Odegard and three other homeowners have filed suit against Jerome and the zoning administrator.

"We have something in the state of Arizona called Proposition 207 or the Private Property Rights Protection Act, which says that if you take away someone’s property rights that you have to compensate them for that loss in their property rights unless it’s for a health and safety issue," said Goldwater Institute attorney Jared Blanchard, who represents the homeowners.

Blanchard said the case will likely go before a judge sometime next year. In the meantime ,Odegard and the others will remain open for business until the matter is settled.

Jerome town officials declined to comment for this story.