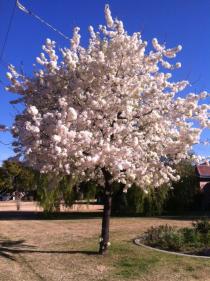 (Photo by Peter O'Dowd-KJZZ)
A warm winter has led to an early bloom for many plants in Phoenix. Ornamental pear trees are flowering across the Valley.

With temperatures in the Valley expected to approach the 90s at the end of the week, some plants are coming out of dormancy earlier than usual. Maybe you have noticed the flowers in your garden are already blooming. Brian Kissinger is a horticulturist at the Desert Botanical Garden and said this year’s mild winter is to blame.

“We are seeing a lot of plants that didn’t get frosted and are still being carried over from last season,” said Kissinger. “In a typical season in Phoenix you would have a couple weeks of frost, but this year we’ve had almost none.”

For some people, spring also means runny noses and itchy, watery eyes. So with a warm winter and a premature spring, Arizonans with allergies might be rushing to the drug store earlier than normal. Miriam Anand, an allergist and former president of the Arizona Allergy and Asthma Society, said symptoms usually do not kick in so soon.

“Because that warmer weather started so much earlier this year, we’ve been seeing more patients having allergy symptoms as early as January,” said Anand. “Normally we don’t see that until March or April.”

Anand said trees, grasses and weeds cause most allergic reactions. “It’s plants that have what we call airborne pollen, meaning the pollen gets blown for hundreds of miles in the air, actually causes the allergies that people have seasonally,” said Anand.

Spring allergies typically ease off during the summer months before some weed pollens return in the fall. Both Kissinger and Anand said they are currently experiencing allergy symptoms themselves.

EDITOR'S  NOTE: The story has been changed to reflect the correct spelling of Miriam Anand's name.