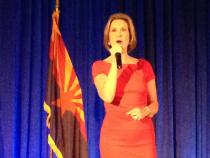 "This is the face of a 61-year-old woman," she said. "I am proud of every year and every wrinkle."

That comment got cheers from a largely female audience at the National Federation of Republican Women convention in north Phoenix.

Fiorina stressed multiple times she is just as capable as a man of being president.

She said women aren’t a special interest group and that female voters are just as diverse and the other half of the voting pool — men.

“Every issue is a woman’s issue,” Fiorina said. “We care about health care, we care about national security, about education about debts and deficits.”

Fiorina related to the group of by talking about struggles she faced early in her career as a female.

"There is a lot of buzz about Carly," said Phoenix resident Cindy Casaus. "Us women do like to stick together and we think she is a great candidate. We are lucky to have a woman in that position, someone we can look up to in the upcoming election."

Fiorina is scheduled to be in the primetime CNN debate Wednesday. Many attribute this to her strong performance in the Fox News "happy hour" debate last month.