Republican lawmaker shoots down plan to ban sleeping on sidewalks 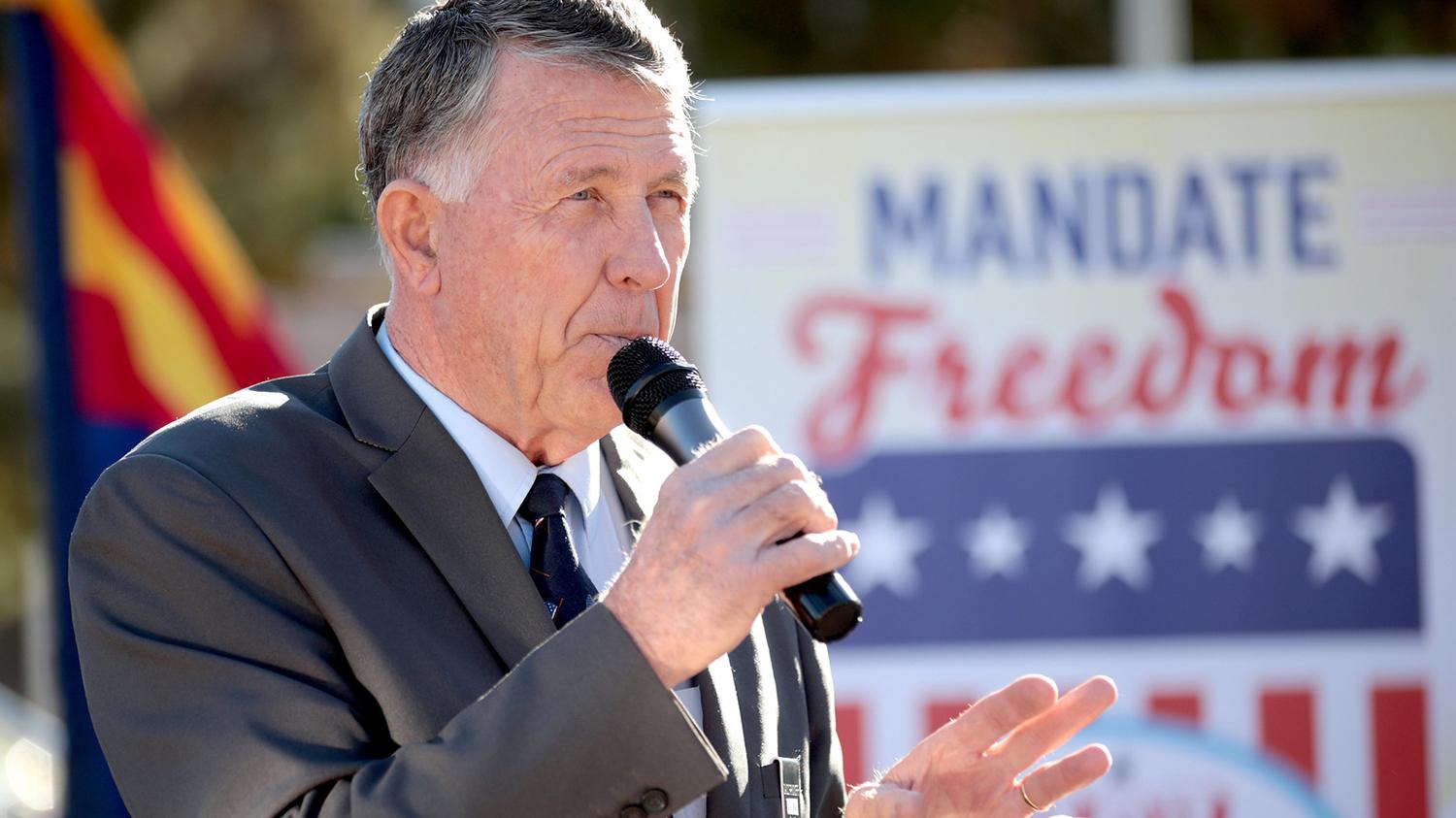 A Republican state senator from Mesa’s personal experience with mental illness and homelessness derailed a bid by another GOP lawmaker, this one a former cop, to make sleeping on a sidewalk a state crime.

Sen. David Farnsworth’s extended comments about his struggles led the chairman of a Senate committee to pull Fountain Hills Sen. John Kavanagh’s proposal from consideration during a hearing this past week. Farnsworth described how a breakdown led him to leave his family home and travel to Seattle, where he lived on the streets and spent time in a homeless shelter.

“And it was a very educational experience for me because I came to the conclusion that mental illness like physical illness can come on any of us and we can heal from it,” Farnsworth said, saying he had panic attacks and was unable to live at home.

“As an adult with children, I ran away from home, so to speak, went up to Seattle, spent weeks up there sitting next to a park,” he said. “During that time period, I was homeless even though I owned a home in Mesa.”

Farnsworth spoke during discussions on Kavanagh’s plan to make it a top-level misdemeanor for someone to sleep, lie down or sit on a street, sidewalk or other public right of way. Kavanagh’s proposal mirrors a Phoenix ordinance that is currently on hold because a federal judge blocked enforcement.

Federal courts have held that bans on sleeping in public can’t be enforced if there are not enough public shelter beds to house the homeless. Marilyn Rodriguez, a lobbyist for the American Civil Liberties Union of Arizona, told the committee that the ACLU sued over the Phoenix ordinance and if the proposal were to become law it likely would face a similar fate.

The number of homeless in the state’s two largest metro areas, Phoenix and Tucson, have grown significantly in the past five years. In Pima County, last year’s annual homeless count found more than 2,200 people did not have housing, compared to just under 1,400 in 2018. In Maricopa County during that same time period, the number of homeless grew from about 6,300 to more than 9,000. The Point-in-Time Homelessness Count to assess the number of unsheltered people in Maricopa County is happening Tuesday.

But Kavanagh said in an interview with Capitol Media Services that there are often shelter beds available and that the homeless could go to parks or other public areas rather than camping out on the street if there aren’t open beds. And he noted that the Legislature earmarked $5 million last year for cities to build temporary shelters and Phoenix is not using that money.

“I think it’s because they don’t want to trigger having to clear their streets and parks,” he said.

Losing the support of any Republican in either chamber spells doom for any legislation that lacks Democratic backing, since the GOP has only one-vote majorities in both the House and Senate. And even if bills make it out of the Legislature, Democratic Gov. Katie Hobbs may hit them with her veto stamp, which she has said she is ready to wield as often as needed.

The Legislature has a series of proposals to deal with homelessness, including an effort from Rep. David Livingston (R-Peoria) that would force homeless people to live in dedicated spots, bar sleeping elsewhere and require the state housing department to dedicate money to creating camping locations.

Livingston was not available for comment Friday. His bill, which failed to advance in the past two years, is set for a hearing on Monday.

New Democratic Gov. Katie Hobbs’ executive budget also takes on the crisis in homelessness by putting $150 million into the state housing trust fund, money that can be used for homeless shelters, rental and utility assistance and to leverage federal funds to build new affordable housing.

The trust fund has been mainly neglected since its funding was stripped during the Great Recession, although it got a $60 million infusion last year when lawmakers doled out hundreds of millions in surplus cash.

Cities are struggling with how to deal with the homeless. 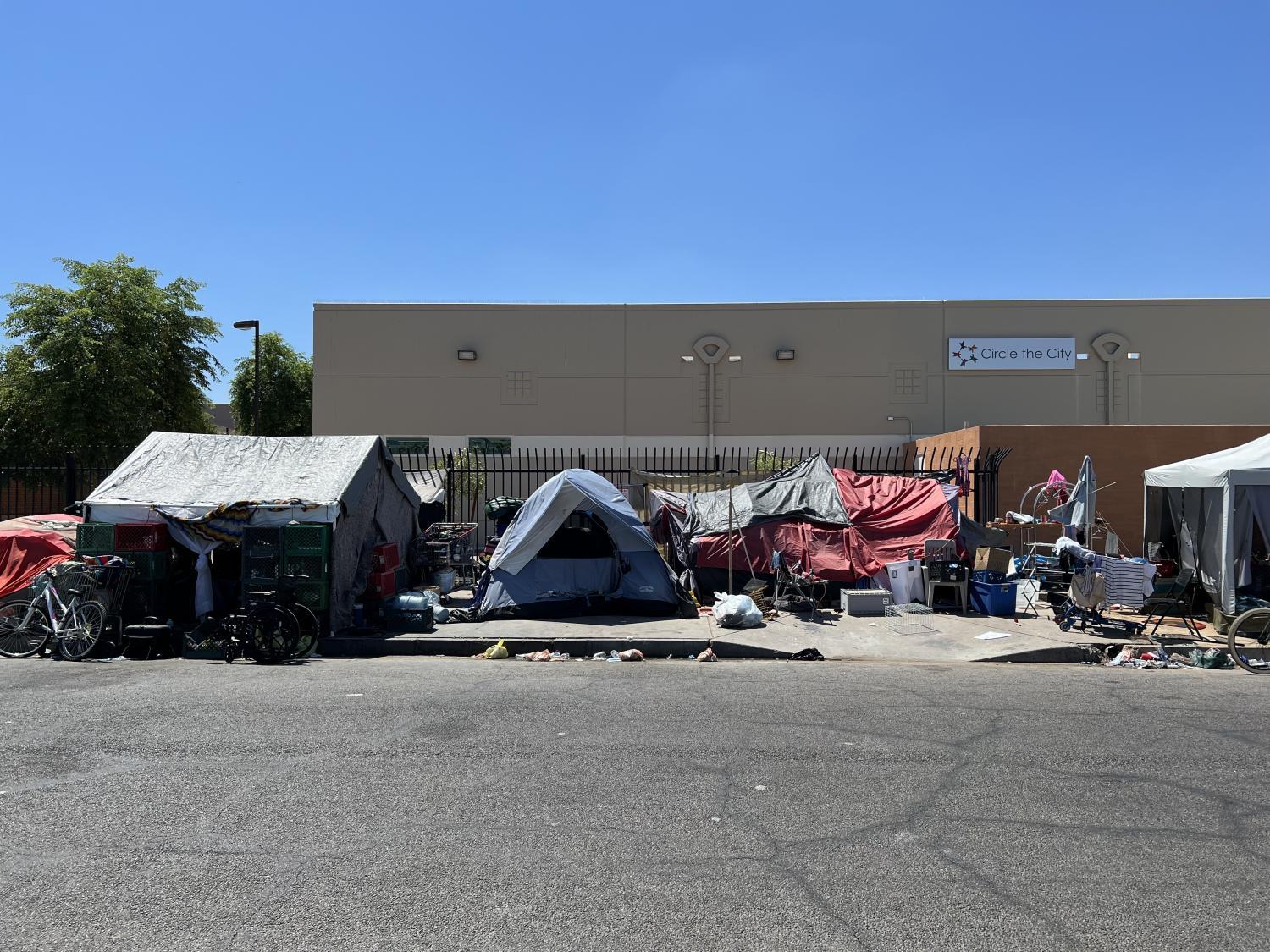 Tim Agne/KJZZ
Tents line the road in "The Zone," a large homeless encampment in Phoenix.

Phoenix faces a lawsuit from business owners near a sanctioned homeless encampment known as “The Zone,” a half-mile from the state Capitol, seeking to declare the area a public nuisance.

In Tucson, advocates for the homeless filed suit last week seeking to bar police from conducting clean-up sweeps of encampments ahead of the annual Gem and Mineral Show, a huge tourist draw. The city also faces pressure to address the issue from business and civic groups who say it is a threat to public safety and business.

The sidelining of the ban on sidewalk sleeping was the second Kavanagh bill that hit a roadblock this past week in the Senate Committee on Military Affairs, Public Safety and Border Security chaired by Sen. David Gowan (R-Sierra Vista).

His other measure would have made it a crime to solicit for money in a raised or marked median, something that the longtime lawmaker calls dangerous. Kavanagh has tried for years to pass legislation that would prohibit asking for cash at freeway off-ramps or intersections, only to see those efforts fail.

The latest prohibition on begging in a median was pulled from consideration after Gowan amended it to allow people to sell items from the center of the street, a change that Kavanagh did not support.

Kavanagh’s bill on homeless sleeping on sidewalks is unlikely to be revived, at least in its current form, unless Kavanagh is able to change Farnsworth’s mind. But that possibility remains remote at this point.

“The homeless problem is a big problem that we need to address,” Farnsworth said.

“I’m not sure this is the way to do it,” he continued. “In fact, I’m not comfortable in addressing it this way.”