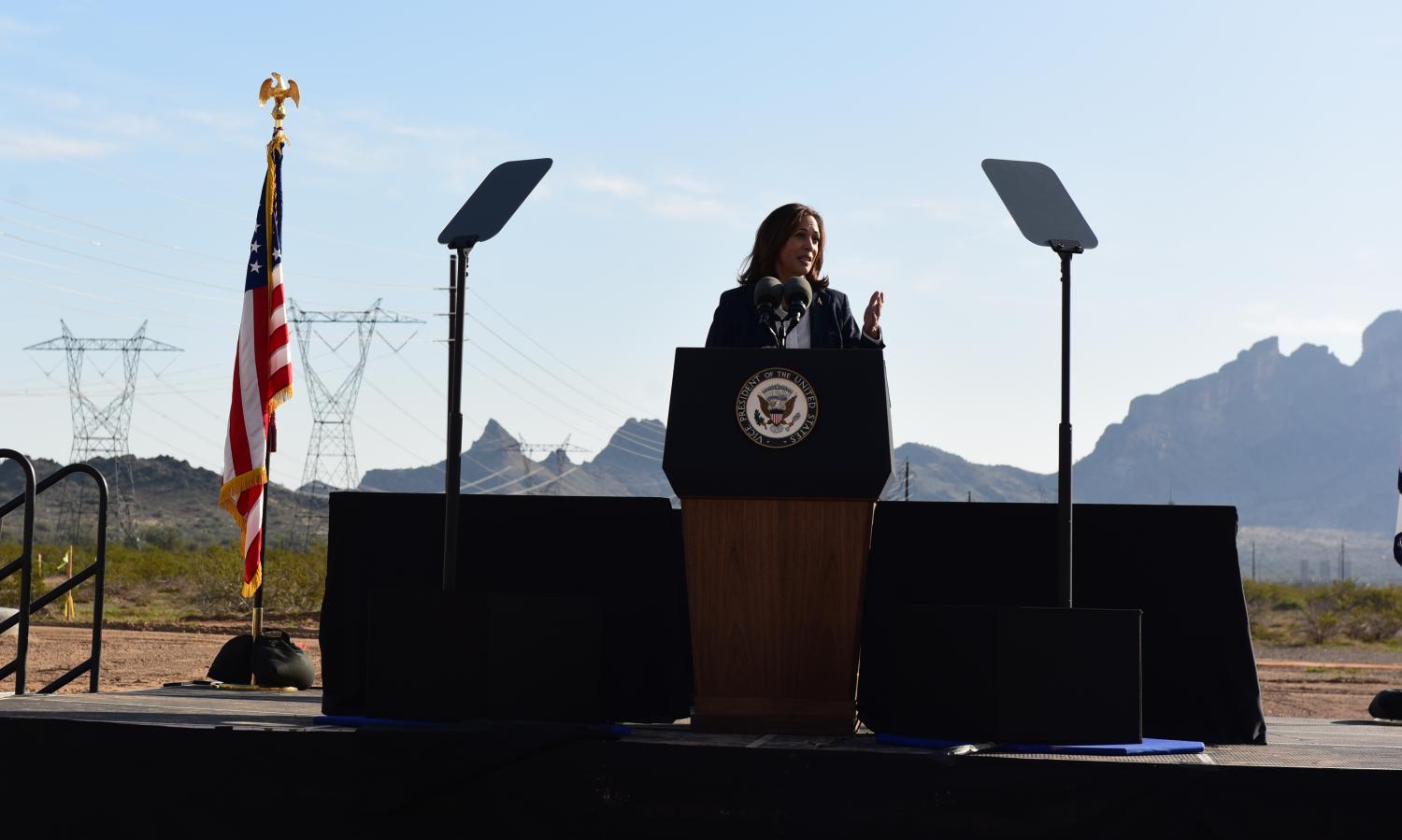 Ron Dungan/KJZZ
Vice President Kamala Harris talks about the need for a cleaner energy grid in Tonopah on Jan. 19, 2023.

The Biden administration has made climate change a priority, and has backed a number of clean energy projects in its first two years.

Vice President Kamala Harris was in Tonopah on Thursday to help break ground for a new transmission line that will help move solar power in the Southwest.

“I think we’ve turned the page, and there's consensus that it's time to take this crisis seriously,” Harris said.

The power line known as the Ten West Link will stretch 125 miles connecting electrical substations in Tonopah, Arizona west of Phoenix and Blythe, California on the border between the two states.

President Joe Biden's ambitious plan to move the nation toward more renewable energy requires thousands of miles of new transmission lines to get power from the vacant lands where solar, wind or geothermal energy can be harnessed to cities where it is used. Administration officials say a massive, high-capacity line stretching across a sunny stretch of desert will encourage investors to drop money into large-scale solar fields in Arizona's sunny desert to produce power for Phoenix and Southern California.

More long-distance power lines also allows for the broader use of renewables even when the sun isn't shining or the wind isn't blowing in a particular location and helps a renewable-heavy grid withstand the vagaries of weather patterns.

The push for clean energy has created new solar arrays all over the nation, including several projects west of the Valley. But the infrastructure to move power for some of these projects does not yet exist, Harris said.

She said that new transmission lines will be necessary as the nation works to build a cleaner grid.

"Every time you turn on a light, or charge a laptop, or plug in your air conditioner, or put leftovers in the fridge, you rely on the power delivered by our nation’s network of transmission lines," Harris said. "And that network is in desperate need of an upgrade."

Harris was joined at the event by Interior Secretary Deb Haaland and Energy Secretary Jennifer Granholm.

“This is an example of what we want to see happening all across the country,” said Energy Secretary Jennifer Granholm, who appeared with Harris alongside Interior Secretary Deb Haaland and Arizona Gov. Katie Hobbs, a Democrat.

The project is expected to create more than 300 jobs.