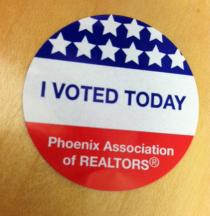 Maybe you stopped by the polls this Election Day to cast your vote. But in at least one polling place, the poll workers had some trouble printing ballots.

Ben Lane, Deputy City Clerk for the City of Phoenix, said for elections like this one it's typical to print the ballots.

Lane said when there’s a technical snafu, like a printer problem, there are back-up procedures. In one case, the ballot was printing crooked on the page and the poll workers were worried the scanner wouldn’t be able to read the votes.

"The machines do have some leniency in terms of what they’ll read," Lane said. "But if the machine doesn’t read it, it’s what’s known as outstacked, and basically what that means is the machine couldn’t read it and then it gets duplicated by a board."

"So each vote the voter had, the board marks that again onto a ballot that will be read by the tabulation equipment," Lane said.

In the case of the printer just going kaput, each polling place has pre-printed emergency ballots that also have to be duplicated. Lane said it’s rare that duplication has to happen at all.