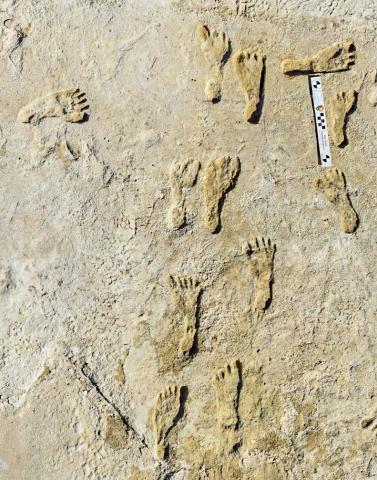 U.S. National Park Service.
The human footprints exist alongside those of giant sloths and mammoths.

When and how ancient humans reached the Americas remains one of the most contentious topics in prehistory.

Last year, the journal Science published a study of preserved footprints in New Mexico’s White Sands area that pushed the date back to between 21,000 and 23,000 years ago.

New findings in the journal Quaternary Research are challenging that assessment.

Did humans reach the New World during the last glacial maximum — the height of the most recent ice age — or afterward?

Based on carbon dating of aquatic plant seeds found in cross-sections contemporaneous with the White Sands footprints, the Science paper argued for the former.

But the new analysis suggests those calculations failed to fully compensate for a key fact: The submerged plants would have taken carbon from the surrounding water.

Radiocarbon dating takes advantage of the fact that cosmic rays continually create a radioactive isotope of carbon in the Earth’s atmosphere. This “flavor,” called carbon-14, is absorbed by plants during photosynthesis. Once a plant (or an animal that ate it) dies, this atmospheric exchange stops, and the carbon-14 in the remains undergoes radioactive decay.

Scientists know the ratio of carbon-14 in the atmosphere during a given period. By comparing that amount to the undecayed quantity in a fossilized plant or animal, they can approximate the sample’s age.

But the seeds used in the Science study came from a plant called Ruppia cirrhosa, also known as spiral ditchgrass or spiral tasselweed. Because it grows underwater, it would have drawn much of its carbon from surrounding water. That carbon, which originated from the eroded bedrock of the Tularosa Valley and the surrounding mountains, would have tested as older.

The authors of the new paper say the previous authors took this into account but underestimated its effect.

To assess how much of a difference that might make in the results, botanists tested Ruppia plants collected from a nearby spring-fed pond. The results showed the plants, which died in 1947, to be 7,400 years old.

Removing this difference brings the footprints’ ages closer to 14,000 to 16,000 years ago, which matches several existing lines of evidence.