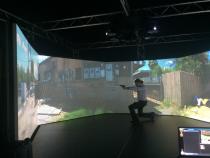 Police are facing increased scrutiny about their use of force in the United States, so many departments are looking at ways to improve their training programs.

For decades, police departments relied on old instructional videos paired with firearms practice at the range as basic training for new recruits on the use of deadly force.

The advent of single-screen simulators dramatically increased the efficiency of training — yet still fell short of recreating the real world situations officers are faced with.

But a company in Tempe has developed what police trainers call a "game changer."

VirTra Systems began as a company that developed entertainment simulators — think arcade games with wrap around screens and surround sound. But over the past 10 years, they’ve set their sights on a new market — developing training simulators for police and the military.

Scott Dilullo, a former police officer, develops training content for VirTra. Demonstrating the flagship simulator, called the V300, he stands on a rumbling platform in the middle of an office building surrounded by five projection screens providing 300 degrees of video and speakers that produce immersive, high-fidelity sound effects.

“This system is all about decision making and use of force,” Dilullo says.

It looks like a very high-tech, first-person shooter videogame — but the simulation is no game.

Before entering the simulation, I’m armed with a real Glock 22 that’s modified to simulate actual recoil. I’m also wearing what VirTra calls a threat-fire device — basically a taser — that would shock me if I was shot in the simulation.

Dilullo leads me through an active shooter scenario at a high school.  Frightened children run all around us while multiple gunmen appear, seemingly out of nowhere. I’m forced to distinguish between threats and hostages in split seconds throughout a messy and chaotic scene.

I move from the cafeteria, through the halls and finally into the library — clearing the school of danger. The experience leaves me sweating and shaking, with a heightened heart rate and stress levels off the charts.

While I was shot in the simulation, my adrenaline was running so high I almost didn’t feel the electric shock, but it has a huge psychological impact.

Real-World Training Without The Risk

Officer Danny King is a trainer at the Henderson Police Department outside Las Vegas. He said the officers dread the threat-fire shock.

“They don’t like it,” King said. “But it tells them, ‘Hey, there’s consequences to you not doing something that you should.’”

He said the interactive nature of the VirTra simulator, especially that threat-fire device, is very effective on rookies and veterans alike.

“Officers put something on the line,” King said. “You know, if I just put a flat screen on the wall and have an officer stand in front of it and there’s no feedback - there’s no consequence to their inaction, then you’re limited to what they’re response will be.”

King said value only comes from a simulation when it really puts the officer in a different state of mind, so they can have the experience the first time in the trainer, instead of the field.

With grant money from the U.S. Department of Justice, King’s department purchased a VirTra simulator for close to $275,000. The company said hundreds are in use by police across the globe. King says one major advantage is the ability to playback the officers’ performance and to alter the scenarios as they go through them.

The Impact Of Simulators On The Brain

Beau Cronin is a neuroscientist researching the effects of virtual reality on the brain. He said immersive simulations impact cognition much in the same way as actual experiences.

He said new connections are made between neurons in the brain as if the simulation actually happened. That's called episodic memory.

“But the interesting thing about simulations is that they also have a lot to do with our perceptual memory,” Cronin said.

So even if a young recruit has never been in a deadly-force situation before, if they experience one in a simulation, the brain will remember it when it happens in real life and act accordingly.

Trainers like Danny King say that leads to better judgement and performance in the field.  As part of training at his department, they also send recruits out to work the streets.

“And when you put those things together, then you’re making a good problem solver who can handle stress under the worst of conditions,” King said.

So hopefully when police officers feel that gas in their veins, they’ll be less likely to panic and more likely to make the right decisions.